The Martins (The Tosspots)2001 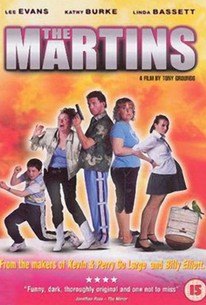 The Martins (The Tosspots) Photos

A man who wants to give his family the good things in life decides to start stealing them in this dark comedy from England. Robert Martin (Lee Evans) is a working-class loser -- or at least he might be working-class if he had a job -- who is obsessed with entering contests, certain a big prize will finally make its way to him. Robert has entered a sweepstakes hoping to win an all-expenses-paid vacation on the Isle of Man, and when a well-off couple (Barbara Leigh-Hunt and Frank Finlay) are declared the winners, Robert concludes he deserves the prize far more than they do, and decides to simply take it away from them. Martin packs up his long-suffering wife, Angie (Kathy Burke); his strident mother-in-law (Linda Bassett); his 14-year-old daughter, Katie (Terri Dumont), who happens to be pregnant; and his surprisingly well-adjusted eight-year-old son, Little Bob (Eric Byrne), and they head off for the nightmare vacation of a lifetime. Ray Winstone and Mark Strong also appear in the supporting cast.

Critic Reviews for The Martins (The Tosspots)

There are no critic reviews yet for The Martins (The Tosspots). Keep checking Rotten Tomatoes for updates!

Audience Reviews for The Martins (The Tosspots)

A cringeable look at Britain's stereotypical benefit scroungers, it's a fairly humourous film, nothing great but certainly worth a watch. I always feel these are the type of films that non-Brits should watch as opposed to the 'Bridget Jones' style ones. Most people associate Kathy Burke with comedy, but it's defintely these kind of roles that Kathy shines in.

The Martins (The Tosspots) Quotes