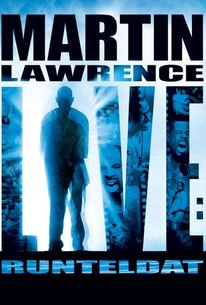 Critics Consensus: Lawrence's delivery can be funny, but the content is stale.

Critics Consensus: Lawrence's delivery can be funny, but the content is stale.

Critic Consensus: Lawrence's delivery can be funny, but the content is stale.

The no-holds-barred documentary-style footage -- spiced with rousing rap music, Martin Lawrence's own razor-sharp commentary and a glimpse of both his triumphs and setbacks -- is only the beginning. Next comes the blackout stage with only the Runteldat logo illuminated in the background and the sound of thousands of adoring fans shrieking and clapping in delight. And finally, as the anticipation mounts to a near-frenzied peak, the announcer booms: "Ladies and Gentleman....Martin Lawrence!"A spotlight hits center stage where the man of the hour stands behind a screen surrounded by smoke. Slowly, the proverbial fog lifts to reveal Lawrence, who descends down a flight of stairs as he waves victory/peace signs...and then he flashes that devilish grin that has "Get ready for a wild ride" written all over it. Yes, the controversial bad-boy of comedy definitely delivers a piercing look at his life, lifting the metaphorical smokescreen that he feels has clouded the public view, commenting on everything from the dangers of smoking to the trials of relationships, and unleashing a nonstop litany of raucous anecdotes, stinging social commentary and very personal reflections about life. -- (C) 2002 Paramount Pictures

Richard Pryor mined his personal horrors and came up with a treasure chest of material, but Lawrence gives us mostly fool's gold.

You either find his jokes funny or you don't. But no one can mistake the ferocious energy of a performer for whom making people laugh has been not just a gift but a matter of survival.

He's just so damn likeable, you can't help but laugh, even when his language is littered with four-letter words and his stories draw up images you might later wish you'd never imagined.

Those prone to indignation need not apply; those susceptible to blue hilarity, step right up.

The comedy here is for adults only.

In English, means Run Tell That.

The bad boy Martin Lawrence that is the box office draw is much funnier than the toned down version seen in this film.

Comes off as a long, laborious whine, the bellyaching of a paranoid and unlikable man.

Lawrence should stick to his day job. He's a better actor than a standup comedian.

There are no featured audience reviews yet. Click the link below to see what others say about Martin Lawrence Live - Runteldat!