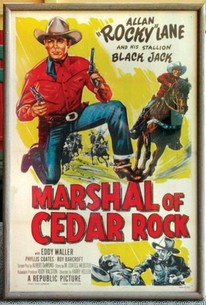 Allan "Rocky" Lane's Republic western series was rapidly drawing to a close when Marshall of Cedar Rock was released in early 1953. Lane plays a U.S. marshal who seems to be derelict in his duty when he allows convicted outlaw Bill Anderson (Bill Henry) to escape. In fact, marshal Lane hopes that Anderson will lead him to bigger fish: specifically, frontier crime boss Henry Mason (Roy Barcroft). "Rocky" also believes that Anderson is an innocent victim of circumstance, and it turns out that he's right. Phyllis Coates, best known to TV buffs as the first Lois Lane on the Superman series, turns in a good performance as Anderson's troubled fiancee.

Allan "Rocky" Lane
as Himself

There are no critic reviews yet for Marshal of Cedar Rock. Keep checking Rotten Tomatoes for updates!

There are no featured reviews for Marshal of Cedar Rock at this time.