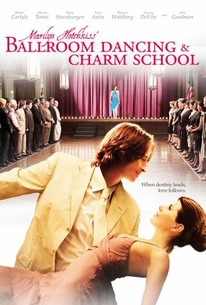 Randall Miller's Marilyn Hotchkiss Ballroom Dancing & Charm School compiles an all-star cast to tell an unabashedly emotional story about life, love, and destiny. Robert Carlyle portrays Frank Keane, a man who has been in a deep depression ever since his wife passed away. One day while driving, Frank sees an accident. He investigates the scene to see if he can help and meets a dying stranger (John Goodman), who tells Frank that he was headed to a dance school in order to reunite with a woman he loved many years before. Frank decides to attend the dance school, and becomes involved with a variety of people. Originally beginning as a short film, Randall Miller's feature-length film was screened at the 2005 Sundance Film Festival.

Miller has all but smothered the charm right out of his Charm School.

The picture trivializes the characters, hinting at depths it can't depict, aiming at a profundity of feeling it can't begin to reach.

Beyond Wahlberg's deft moves, School's dancing is leaden, not charming, and the only challenge is enduring the film's lumbering progress until it finally clicks at the end.

Predictable and decidedly old-fashioned in its sensibility, the film is likely to win over audiences if not critics.

While it's at times too melodramatic and formulaic to be entirely successful, it still holds some appeal; its very amateurishness is what makes it charming.

Marilyn Hotchkiss' Ballroom Dancing and Charm School may stumble at times, but at least it gets out on the dance floor and has a good time.

Yet another ballroom dancing movie presents dance as a universal balm that heals life's problems in this mildly inspired dramatic comedy.

Why would Frank drop everything to embark on this lunatic mission? Well, the answer is simple. If he didn't, there would be no movie - and perhaps that wouldn't have been such a bad thing.

A surprisingly-moving message movie about love and redemption filled with sentimental and transformational moments leading to tearjerker of a finale.

A miscast hodgepodge of a genre stew.

That the film was itself borne out of risk invests its message with an honesty and an authenticity more than sufficient to offset its flaws.

Stars for having such a great cast. John Goodman plays a memorable character, and it has Ernie Hudson so you know you want some.

I absolutely ADORE Mary Steenburgen but she is a horrible dancer. Carlyle was excellent. Rest of film was farfetched and flighty.