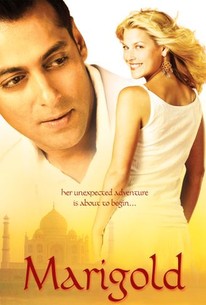 Critics Consensus: Marigold attempts the difficult trick of combining Bollywood movies and American rom-coms -- and ends up with an awkward blend that will satisfy fans of neither.

Critics Consensus: Marigold attempts the difficult trick of combining Bollywood movies and American rom-coms -- and ends up with an awkward blend that will satisfy fans of neither.

Critic Consensus: Marigold attempts the difficult trick of combining Bollywood movies and American rom-coms -- and ends up with an awkward blend that will satisfy fans of neither.

A demanding American actress (Ali Larter) heads to India in order to shoot a low-budget Hollywood film, only to find herself stranded in Bombay with no luggage and attitude to spare. Despite the unfortunate start to her Bombay adventure, the once-jaded actress is soon swept up in the glitz and glamour of the local filmmaking scene and cast in a lavish Bollywood musical. Once on the set, she meets a handsome prince and falls hopelessly in love.

Gulshan Grover
as Vikram
View All

Although intended to celebrate Bollywood, this Marigold smells suspiciously of trying to cash in on the current global obsession for all things Bollywood.

Bollywood fans will dismiss the mishmash as the work of an American director 'slumming' in a genre outside his own culture, and Western audiences unfamiliar with Hindi-language masala movies will find the whole thing puzzling.

[Director] Carroll knows his Bollywood stuff and, refreshingly, doesn't apologize for, or waste time explaining, an industry and a style that most Americans still regard as silly. Instead, he honors them.

Carroll seems to be saying that we should regard Bollywood as a harmless part of Indian culture.

Ali Larter plays an amazingly bitchy actress sent to Bollywood. They hate her, then they love her. I didn't quite get the love bit.

[Willard] Carroll tries to be warm and affectionate towards Indian culture and Bollywood, but the film is riddled with clichés.

Larter is just about average. Salman hasn't looked worse, with a plastic smile, a faraway look and a fake, incomprehensible accent that forces one to demand subtitles.

It's all dizzying, but what a delight.

Salman Khan is one of the big names in Bollywood whose appeal continually eludes, and here he simply proves that he is just as much a bafflement in English as he is in Hindi.

This first co-production between the United States and India starts badly and never recovers.

"If you had a choice, tradition or love, what would you take?" If you have ever seen a Bollywood movie, you'll know they are longer than most movies due to the multiple song and dance routines. Don't get me wrong, I like Bollywood movies and watching a movie with sub-titles is no hardship but I find any movie over three hours long is a tad too long to be appreciated. Fortunately, this one fits into the "standard" movie length which happens to be a plus in my book. Plot: An American actress, the beautiful and bitchy Marigold (like the flower), played by Ali Larter goes to India to act in a low budget film, only to find herself stranded there when she finds on arrival that the film has been folded due to financial issues. Worse than that, she loses her luggage and is out of money. She befriends an Indian girl Rani who gets her a role in a Bollywood musical which she accepts hoping that she can earn enough money to get back to the States. Whilst there she meets Prem, the suave and handsome choreographer of the film played by Salman Khan, in real life Bad Boy Bollywood mega-super star who teaches her the art of dancing. An interesting movie!! This is the story of a woman who travels to India for a movie, and discovers not only herself but love. As she redefines concepts of life, she realizes that her heart desires more than just happiness. Great cast- Salman Khan, Ali Larter, Suchitra Pillai-Malik, and Nadana Sen. Great performances by Ali Larter and Salman Khan. Great music. Definitely worthy!