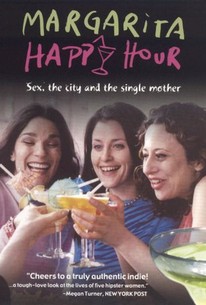 It's hard to be hip and a mother at the same time, as one twenty-something New Yorker discovers in this independent comedy drama. Zelda (Eleanor Hutchins) is a struggling artist who lives with her boyfriend Max (Larry Fessenden), a would-be writer, in a bohemian neighborhood in Brooklyn favored by fellow creative types for the cheap rents and friendly atmosphere. Zelda is also the mother of a two-year-old boy, Little Z (Jonah Leland). Max is the child's father, but doesn't go out of his way to shoulder his share of the labor in caring for him; Zelda says that since she opted to keep the baby, the ultimate responsibility is hers, not his, but it's hard not to sense a hint of resentment in her attitude towards Max. Zelda strives to be a good mother and provide for her son while staying true to her on-the-edge personality, but she's begun to realize that she can't go on being the life of the party and a responsible single parent at the same time; she's also grown tired of sharing an apartment with five other adults, none of whom is holding down a full-time job. As Zelda is arriving at an emotional crossroads, her old friend Natali (Holly Ramos) re-enters her life; Natali has just gotten out of rehab after her latest attempt to wean herself off heroin, but with little to keep her occupied, her self-control is not especially strong, and Natali soon finds herself becoming quite friendly with Max, who is growing weary of his relationship with Zelda. Margarita Happy Hour was shown at the 2001 Sundance Film Festival, where it was enthusiastically received by audiences and critics.

Viva Ruiz
as Flashback Friend No. 1

Will Keenan
as Lester

Michael Buscemi
as The Pornographer

Jerrie Swanson
as Can Lady

Michael Schmidt
as Attacker No. 1

Michael Goduti
as Attacker No. 2

John B. Davila
as Attacker No. 3
View All

The strength of Hutchins' performance and the open-endedness of Chaiken's film keep Zelda vivid long after the fade-out.

Effective in all its aspects, Margarita Happy Hour represents an auspicious feature debut for Chaiken.

With its parade of almost perpetually wasted characters ... Margarita feels like a hazy high that takes too long to shake.

Its portrait of a very unsung sector of society is refreshingly honest and entertaining.

A joyful celebration of female friendship and an unusually honest look at newly responsible young women wistfully saying goodbye to the dreams of their youth.

[Chaiken's] talent lies in an evocative, accurate observation of a distinctive milieu and in the lively, convincing dialogue she creates for her characters.

A miniscule little bleep on the film radar, but one that many more people should check out

It's a pedestrian, flat drama that screams out 'amateur' in almost every frame.

The film is like sitting in a downtown café, overhearing a bunch of typical late-twenty-somethings natter on about nothing, and desperately wishing you could change tables.

One of those rare films that seems as though it was written for no one, but somehow manages to convince almost everyone that it was put on the screen, just for them.

There are no featured reviews for Margarita Happy Hour at this time.