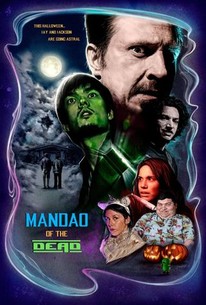 Mandao of the Dead Videos

Mandao (Man-Day-Oh) of the Dead is a supernatural comedy about the unambitious Jay Mandao who lives frugally off his late father's cereal royalties. He wants nothing more than to live in solitude, but is duped into taking in his adult nephew-in-law, Jackson. As Halloween approaches, Jay begins having odd dreams and hallucinations, only to find out that he has the ability of astral projection. Jay and Jackson are approached by a ghost who has a small window of opportunity to reverse his death at the hands of Jackson's murderous ex-girlfriend. This Halloween... Jay and Jackson are going astral.

Critic Reviews for Mandao of the Dead

As a film it offers some interesting ideas but fails to land.

Mandao of the Dead is a surprisingly well-made indie horror comedy that has heart and delivers plenty of laughs.

Supernatural cereal packets, ghosts, time travel, astral projection and yes, even vampires are seamlessly sewed into a film that has instant cult classic written all over it.

Dunn may not have much experience - this is only his second feature - but he makes a better film than contemporary directors with twenty-plus features on Amazon. His brand of passion and dedication cannot be imitated or learned.

Audience Reviews for Mandao of the Dead

There are no featured audience reviews yet. Click the link below to see what others say about Mandao of the Dead!

Mandao of the Dead Quotes