The Man Who Shot Liberty Valance1962 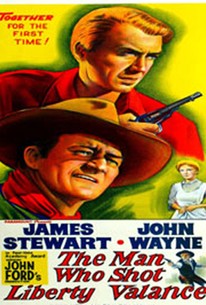 Critics Consensus: Featuring a trio of classic leading men and a rich story captured by a director at the peak of his craft, The Man Who Shot Liberty Valance is one of the finest Westerns ever filmed.

Critics Consensus: Featuring a trio of classic leading men and a rich story captured by a director at the peak of his craft, The Man Who Shot Liberty Valance is one of the finest Westerns ever filmed.

Critic Consensus: Featuring a trio of classic leading men and a rich story captured by a director at the peak of his craft, The Man Who Shot Liberty Valance is one of the finest Westerns ever filmed.

Eastern attorney Ranson Stoddard (James Stewart) heads to the wild West in search of a new life. He settles in the small town of Shinbone where he meets up with Liberty Valance (Lee Marvin). Valance is as bad a villain as there ever was, and his dastardly deeds are financed by an evil conglomerate resolute on stopping the territory from gaining statehood. When Valance beats Stoddard to a bloody pulp, Stoddard is rescued by rancher Tom Doniphon (John Wayne). Tom helps Ranson to a nearby restaurant where owner Hallie (Vera Miles) who patches him up and gives him a job as table server. Valance and his sadistic sidekicks delight in berating the hapless waiter, branding him as "yellow." Once again, Tom comes to the rescue when Ranson is tripped by Valance and spills his food. Ranson's only allies appear to be Hallie, Tom, and a dipsomaniac newspaper publisher named Dutton Peabody (Edmund O'Brien. When Peabody prints an article which advocates statehood, he is beaten by Valance and his vermin and his printing office is wrecked. Having stood by and watched the action long enough, Stoddard places his lawyer's shingle in front of the newspaper office. This sets the stage for a showdown between the lawless Valance and the lawful Stoddard, while Tom waits in the wings and watches. Film is directed by John Ford.

Shug Fisher
as Kaintuck the Drunk

Jack Pennick
as Jack the Bartender

Montie Montana
as Politician on Horseback

Buddy Roosevelt
as Townsman in Diner

News & Interviews for The Man Who Shot Liberty Valance

View All The Man Who Shot Liberty Valance News

Critic Reviews for The Man Who Shot Liberty Valance

There's much to say about it; the simplest is that it's both the most romantic of Westerns and the greatest American political movie.

There is a purity to the John Ford style. His composition is classical. He arranges his characters within the frame to reflect power dynamics -- or sometimes to suggest a balance is changing.

John Ford and the writers have somewhat overplayed their hands. They have taken a disarmingly simple and affecting premise, developed it with craft and skill to a natural point of conclusion, and then have proceeded to run it into the ground.

A great film, rich in thought and feeling, composed in rhythms that vary from the elegiac to the spontaneous.

Ford's purest and most sustained expression of the familiar themes of the passing of the Old West, the conflict between the untamed wilderness and the cultivated garden, and the power of myth.

A basically honest, rugged and mature saga has been sapped of a great deal of effect by an obvious, overlong and garrulous anticlimax.

Long before Watergate-era cynicism about the media set in, we were told with a wink by perhaps the West's principal mythologist to be skeptical about everything we had been told.

Hence, contrary to expectations of realist films, this western stands out for how comprehensive a town and a world it manages to build around its central event.

The Man Who Shot Liberty Valance (1962) was another nostalgic and memorable B/W John Ford-directed film about the passing of the Old West and the rise of civilization - it was his last great film.

It is often sentimental and stagy, but it is rarely boring... The screenplay is just the fable Mr. Ford needed for his farewell to the Western.

With all the Ford requirements and the Ford mystique, including John Wayne and James Stewart off- setting each other's archetypal physiques, presences, worlds and implications; and Edmond O'Brien, at his uproariest.

Merely one of the greatest Westerns ever made, John Ford's The Man Who Shot Liberty Valance is a genuine masterpiece, notable for (among other attributes) the immortal line, "When the legend becomes fact, print the legend."

Audience Reviews for The Man Who Shot Liberty Valance

"When the legend becomes fact, print the legend". That quote is a great one, especially when it comes to taking a closer look at history, but especially historical memory, and its impact. And it's the key to this film too, which is one of many standouts from its legendary director John Ford. Jimmy Stewart is Ransom Stoddard- a greenhorn eastern lawyer whose efforts to dispense his brand of justice out in the small western town of Shinbone are hampered by the local menace Liberty Valance, played wonderfully by Lee Marvin. John Wayne plays Tom Doniphan- the toughest and meanest man in Shinbone (next to Valance), who does his best to help Stoddard, despite some complications, namely their methods of how to proceed, as well as the fact that they're both pining after the same lady- the lovely Hallie, who is played by Vera Miles. This is one of many elegiac westerns that was ahead of its time for trying to demythologize the west before it became popular. It's also maybe the only time in his career where Ford is presenting things with a decent amount of pessimism, something that would also later get popularized a few years later along with revisionism, and demythologizing. The acting is great, and Ford had a tremendous cast to work with, There's also lots of smaller appearances from way too many genre luminaries to count, and that certainly scores the film some extra points, too. I love how, even though this was made in 1962, they chose to shoot in black and white, and almost exclusively in interiors. There's a few moments outside, but there's none of the grand landscape shots you might expect. I think it really adds to the mood, tone, and point the film is trying to make about expectations versus reality.The music is also pretty fine as well. All in all, this is a superb film. Definitely give it a watch.

Ford's last masterpiece. A truly epic story of the end of the old west, Stewart and Wayne put in masterful performances.

I initially wasn't too enthused about the idea of sitting down with this film. While I certainly admire John Ford, I had grown accustomed to the more coarse view of human nature on display in the spaghetti westerns of Leone, Corbucci, and Petroni. However, I was in for quite a pleasant surprise with this film. The film centers on the life of Rance Stoddard (Jimmy Stewart) and his return to the Western town where he came of age. In a series of flashbacks, we follow the exploits of Stoddard and his brush with the town's hero Tom Doniphon (John Wayne), and the town menace Liberty Valance (Lee Marvin). Yet, while this seems to have all the makings of a classic good vs. evil confrontation, Ford plays around with the idea of justice. As if representing two adverse parts of the brain, Wayne and Stewart are ardent about fighting their own fights in their own ways. For Wayne, justice can be achieved with old-school heroism, a little gunpowder, and a dash of wit. For Stewart, the law of the land is sufficient and he is intent on reshaping the town's attitudes in such a way. Both men mock the avenues taken by their counterpart and blindly follow what they know to be true. They are two opposing forces, both immensely powerful in their own right. However, influence eventually leaks in on both sides and both men seem to come to at least some sort of understanding regarding the importance of their separate ways. This sense of duality is strongly diffused throughout the picture and Ford highlights this visually by his expert use of shadows. In most shots, the characters shadows are projected on the wall behind them as if to showcase the dual nature that lurks in the hearts of these men. Yet, rather than casting judgement, it seems as though Ford wants to illuminate and understand these two opposing ways of life, and to lament the passing of western way. Being one of Ford's last films, the viewer gets a sense that he knew the rule of the Western was coming to an end. Although Wayne is just in his own way, his character seems to know that the times are changing. No longer does having the fastest draw bring virtue and success and Wayne's character goes through a heartbreaking acceptance that Stewart's generation is taking over. In one shot in particular, Ford has Stewart's character standing in front of an old stage coach covered in dust and cobwebs. It is an homage to the old west that is both understanding and mournful. While Clint Eastwood's "The Unforgiven" has long be touted as the definitive eulogy of the western, I would argue that Ford's film is a much more fitting tribute to such a wonderful genre of film.

The Man Who Shot Liberty Valance asks the question: can the moralist Jimmy Stewart civilize the west, or will it uncivilize him? Stewart, John Wayne, and Lee Marvin come together under the guidance of master John Ford in a film that appears to adhere to respective Hollywood persona's only to shatter them later on. Who ever expected to see Stewart pick up a six shooter and duel or Wayne shoot a man square in the back? Nobody.