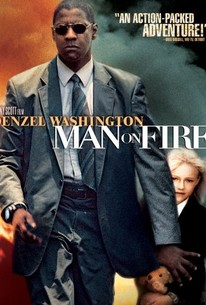 Critics Consensus: Man on Fire starts out well, but goes over the top in the violent second half.

Critics Consensus: Man on Fire starts out well, but goes over the top in the violent second half.

Critic Consensus: Man on Fire starts out well, but goes over the top in the violent second half.

A wave of kidnappings has swept through Mexico, feeding a growing sense of panic among its wealthier citizens, especially parents. In one six-day period, there were twenty-four abductions, leading many to hire bodyguards for their children. Into this world enters John Creasy, a burned-out ex-CIA operative/assassin, who has given up on life. Creasy's friend Rayburn brings him to Mexico City to be a bodyguard to nine-year-old Pita Ramos, daughter of industrialist Samuel Ramos and his wife Lisa. Creasy is not interested in being a bodyguard, especially to a youngster, but for lack of something better to do, he accepts the assignment. Creasy barely tolerates the precocious child and her pestering questions about him and his life. But slowly, she chips away at his seemingly impenetrable exterior, his defenses drop, and he opens up to her. Creasy's new-found purpose in life is shattered when Pita is kidnapped. Despite being mortally wounded during the kidnapping, he vows to kill anyone involved in or profiting from the kidnapping. And no one can stop him.

Jorge Almada
as Bodyguard 1A

Eduardo Diaz Yanes
as Bodyguard 2A

Nydia A. Trujillo
as Nurse 1

Arturo Farfan
as Bartender
View All

News & Interviews for Man on Fire

View All Man on Fire News

Critic Reviews for Man on Fire

Washington has chosen wisely, and he hasn't had to wait long.

Scott's latest exercise in assaultive excess nevertheless lingers for two and a half hours, like a drunken houseguest who won't leave.

It ought to be seriously unpalatable stuff, yet there's something so cherishably naff about Scott's jumping-bean cutting and hokey-cokey camerawork that it's almost a guilty pleasure.

If it's just Scott's way of saying, "Get a load of this, Quentin", the speed of response (12 years since Reservoir Dogs) leaves something to be desired.

Po-faced, dull and sadistic, Man On Fire is a major disappointment from the Crimson Tide team of Denzel Washington and Tony Scott.

Suffice it to say nothing about this pumped-up, hyperthyroidal Tony Scott revenge flick makes sense, but it takes two hours to kill off as many people and demolish as many vehicles as Charles Bronson used to do in 30 minutes.

A film that ends up being tedious due to its excessive duration, annoying by its formal lack of control. [Full Review in Spanish]

Extremely violent; not for kids.

"Man On Fire" is remake of a notoriously dreadful 1987 movie, based on the same-titled novel by A.J. Quinnell, and it fares little better here with Tony Scott ("Spy Game") directing with a flamboyant use of flashy subtitles and camera techniques lifted f

Scott tries too hard to look like Ridley Scott's films with similar and derivative style, and hazy cinematography...

A down-and-dirty revenge tale that packs an emotional punch.

Audience Reviews for Man on Fire

Cool movie where Denzel protects a litte girl at all costs.....what isn't awesome about that?

The plot doesn't necessarily blow anything out of the park, but the way the story itself unfolds is what gives this film its entertainment value. Despite being a tad lengthy, as it approaches 2 and a half hours, the first hour of character development really sets up the the second half quite nicely.

It's no secret that time does pass until the action shows up, but it is worth the wait. The violence is served with a good helping of blood and brutality, while also not going overboard as to be on the gruesome side; however, Tony Scott's visual effects tends to detract from, not just the action scenes, but the rest of the film as well.

Denzel Washington is a solid choice as former agent Creasy. Dakota Fanning also lives up to expectations. The chemistry between the two is on the money and this is what really makes this picture work.

Man on Fire does have a few disappointments, but all in all, it is one recommendable film.

Tony Scott takes a typical story of redemption and turns it into one of his typical, albeit entertaining stylish frenetic action romps. John Creasy is a burnt out, depressed, alcoholic ex-CIA agent turned mercenary who gets a new lease on life after he agrees to become the bodyguard to a precocious little white girl named Pita living in Mexico City with her affluent "new money" parents. Slowly but surely, Pita starts to rehumanize Creasy and bring him out of his slump. He goes over the edge and returns to his violent past life however, when she gets kidnapped and held for ransom. And, as you might expect, there's a twist (like always) and the film is heavy doses of both heart, mayhem, and splattered wall to wall with both blood and religious iconography/symbolism. Basically this is a lot like Taxi Driver in many repects, though not nearly as competantly made, memorable, or brilliant. It's solid, sure, but Scott's stylistic tendencies are a bit overbearing and distracting here. I know he included them as a way of trying to set this routine story apart from other films of this ilk, but it doesn't work out for him nearly as much as it should. The dialogue is clunky, the film isn't quite as balls to the wall in some places (as it should have been), and, even though I am a fan of heavy religious symbolism, it feels way too forced here. Also, the subtext involving corruption in Mexico is a little trite and really glossed over instead of being insightful and full of depth. I do like htis movie though. I mean, it's Denzel Washington kicking ass and taking names...what's not to like? Walken put in an okay supporting performance where he doesn't paly a villain this time, and yeah, this is the breakout film for little Dakota Fanning who does a decent job with the amount of screentime she's given. All in all, this is passable, but overwhelmingly underwhelming in it's lack of focus and over the top with it favoring of style over substance. B-.

Based on a novel which I didn't know and actually a remake of an earlier film from 1987, pretty much the same deal accept its set in Italy as at the time there were many kidnappings there. This time Scott sets the film in Mexico City for its high scores in kidnapping and the grounded Washington takes on the role as Creasy. First thing I have to mention is how good this film looks, the Scott brothers know how to make films look sweet and this is no exception. You really get a hot humid, sweaty, sticky feel for this setting, you can sense the tension and stress on 'Creasy's' shoulders merely from the weather that swirls around him. Mexico City is a vibrant colourful place and Scott makes full use of this with his camera angles and uneasy sequences which he seems to almost blur when combined with the native soundtrack and fast movements of the action, everything feels uncomfortable as you wait for the inevitable to happen. The only issue I had with the film is its really quite predictable even if you have never seen the first film or read the book, Washington is stoic and owns his role but you know what's gonna happen at every turn. The film is also a bit slow really as we see 'Creasy' gradually gain 'Lupita's' trust and friendship which is needed of course but basically the fun doesn't kick in until she is stolen away, until then your just watching filler as it were. I think the film wants to be epic but doesn't really make it, the cast is certainly aimed at a thriller epic and the musical score really really wants you to feel the emotion as it builds towards the end but I personally just didn't feel it. I think Tony tries to nick his brothers idea from 'Gladiator' with the haunting score towards the end, the kind of 'Clannad' type sounds do seem rather familiar. Its a solid film with good performances but not as stand out as you would hope for, quite bleak and dirty with a real gritty essence but ends up becoming a typical vengeance thriller, better than most but nothing grand.