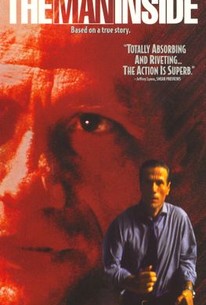 Adapted from a true story, West German investigative journalist Gunther Wallraff (Jurgen Prochnow) decides to fight sleaze with sleaze as he goes undercover at a tabloid newspaper to dig up the dirt on the paper's own unethical practices. Rising to the top of the hierarchy by working at the kind of journalism he despises, Wallraff soon discovers that the paper is waging a campaign against his true-life self; he must fight to emerge with his identity intact.

Mark Zak
as Aide To Borges

Walter Gontermann
as Firechief
View All

Critic Reviews for The Man Inside

The Man Inside is meant to be a journalistic thriller in the mold of All the President's Men. Instead, it unwittingly reflects the idea that even the most daring reporter is just a dull guy who goes out to his job every day.

Here is one of the most inexplicable exposes ever filmed, wrapped in a package that sometimes is intriguing, sometimes so howlingly overacted that all we can do is watch in disbelief.

As a political thriller, it has virtually nothing to say, and what it does say is laughable.

The Man Inside offers such a simplistic, comic-strip version of Wallraff's saga that it ends up inspiring chortles of disbelief. The movie is at once drab and hectoring.

There are no featured reviews for The Man Inside at this time.

The Man Inside Quotes