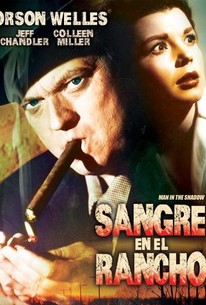 Man in the Shadow Photos

Man in the Shadow is a better-than-usual Albert Zugsmith production starring Jeff Chandler as the newly appointed lawman in a corrupt southwestern town. A Mexican laborer has been murdered, a crime which powerful land baron Orson Welles wants the sheriff to ignore. Chandler bucks Welles' wishes and investigates the killing, with the trail of evidence leading inexorably to Welles...but what's the motive? Man in the Shadow is unimportant enough on its own, but the fact that it was produced at all would have a far-reaching effect on cinematic history. It was during shooting of this western that producer Albert Zugsmith and actor Orson Welles agreed to collaborate on the Welles-directed masterpiece Touch of Evil (58).

Critic Reviews for Man in the Shadow

Audience Reviews for Man in the Shadow

Solid suspense with Chandler excelling in the lead. The director uses the low budget limitations of the production to keep the focus on the main conflict delivering a taut gem.

welles' only western; he plays the corrupt cattle baron of the golden empire ranch where a mexican bracero has been mysteriously murdered, apparently for looking at his daughter the wrong way. the local sheriff stubbornly insists on investigating leading to a whole lot of trouble

Man in the Shadow Quotes