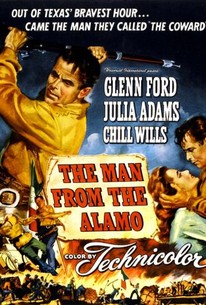 Man From the Alamo Photos

The Man From the Alamo manages to pack a few nuances and surprises in its traditional western plotline. During the siege at the Alamo, John Stroud (Glenn Ford) is chosen by lot to leave the fort and warn the families of the mission's defenders of the impending arrival of General Santa Ana. But when everyone around him is wiped out by the Mexicans, Stroud has no proof that he was ordered to leave his post, and is therefore branded a coward. He spends the rest of the film performing acts of conspicuous bravery to clear his name--and also tracks down the film's real villain, Jess Wade (Victor Jory), who robbed the Alamo victims of their possessions after the smoke cleared. Julie Adams, Chill Wills, Hugh O'Brien, Neville Brand, Arthur Space and future soap-opera star Jeanne Cooper round out the cast.

Critic Reviews for Man From the Alamo

Audience Reviews for Man From the Alamo

Interesting "what if" story.

Man From the Alamo Quotes