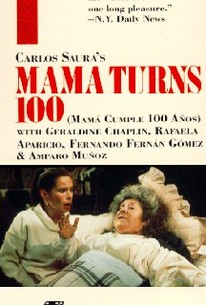 For the Spanish Mama Turns a Hundred, director Carlos Saura reassembles many of his cast members from his 1972 Anna and the Wolves. As Mama reaches the century mark, her wolf-pack relatives go fang and claw after currying her favor in hopes of a large legacy. The film is set during the Franco regime, permitting Saura to use his greedy family as a microcosm of all that had gone bad in Spain since the Civil War. Though potentially grim, Mama Turns a Hundred is essentially a comedy, though many of the laughs are of the "shock of recognition" variety, especially for those who've come from a similarly avaricious family. The film was originally released as Mama Cumple Cien Anos. ~ Hal Erickson, Rovi

There are no featured reviews for Mamá Cumple Cien Años (Mama Turns 100) at this time.