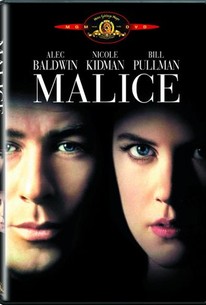 Alec Baldwin stars in this thriller as Dr. Jed Hill, a brilliant young trauma specialist who begins to believe he can do no wrong after he saves the life of a patient given up for dead by another doctor. Jed runs into an old classmate, Andy Safian (Bill Pullman), who is now a college dean. Andy invites Jed to stay with him in the attic bedroom of a house he is renovating with his wife Tracy (Nicole Kidman). Tracy takes a dislike to Jed, whom she thinks is a psychotic egomaniac. In the mean time, Andy has to deal with a serial killer on the loose among the campus dorms. While Andy is helping belligerent law enforcement officials with the murder investigation and Jed is drinking straight shots at the local saloon, Tracy begins to have abdominal pains and is rushed to the emergency room. Jed comes directly from the bar and slices her open, removing more from her body cavity than he should. The allegations fly fast and furious between Tracy, Andy, and Jed.

Sara Melson
as Girl on Bike

Ann Cusack
as Waitress
View All

A melodramatic thriller which did surprisingly well in the US given its implausible straight-to-video scenario. Undistinguished.

It's got suspense but no staying power.

No matter how wild the plot reversals, there's always a slightly madder one to come.

The only thing that makes this ludicrous botch even borderline watchable is Alec Baldwin's enjoyably supercilious performance as a leering stud surgeon who thinks nothing of belting back shots of bourbon before going in to perform an operation.

Offhand, this is the only movie I can recall in which an entire subplot about a serial killer is thrown in simply for atmosphere.

Malice is a polished Hollywood thriller with good pacing and plenty of slick plot devices.

The plot is twisty enough to keep you guessing through most of the film, but not all of it.

The plot mechanics are well-oiled and above average for this type of vehicle.

Malice is a film that very much wants to be a combination of Body Heat and classic Hitchcock -- but how you take to it will depend on your patience with silly cliches and plot holes large enough to hide dinosaurs.

Maybe it depends on how you feel about such intrusions but me, I don't welcome malice as my primary movie-going experience.

Malice belongs to its trio of leads -- all giving terrific performances, with Kidman's transitions creating an especially memorable screen portrait. But then Sorkin's sharp, smart dialogue gives them a lot to work with.

There can't have been much aforethought to Malice, Harold Becker's preposterous new thriller.

A happily married couple want to have children but are not able to after Nicole has an operation that goes wrong. Interesting thriller. Good cast.

Alec Baldwin and Nicole Kidman shine in this thriller that will keep you guessing....

Lots of plot twists and turns. I liked it. Nicole Kidman is great. It's quite a ride, and takes some unbelievable jumps in logic.