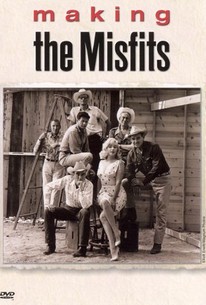 In 1960, director John Huston began work on a new and ambitious project -- a drama starring Marilyn Monroe, Clark Gable, and Montgomery Clift, with a screenplay by noted playwright (and Monroe's husband) Arthur Miller. However, The Misfits quickly proved to be an especially troubled production -- the emotionally fragile Monroe found it difficult to work on schedule, Clift's abuse of alcohol and pills had begun to catch up with him, the aging Gable had a hard time keeping up with his taxing role, especially after he decided to do his own stunts, and Huston found it nearly impossible to manage the emotional crossfire on the set. Gable passed on several weeks after filming was completed, and Monroe and Miller's marriage collapsed not long afterward; it was to be Gable and Monroe's final film, and Clift would pass on after making only two more pictures. A team of photographers from the celebrated Magnum Agency were on hand to document the production of The Misfits, and Making The Misfits combines their images with rare behind-the-scenes footage and interviews with surviving members of the cast and crew (including Arthur Miller and Eli Wallach) to offer a telling portrait of a memorable if misbegotten motion picture.

Critic Reviews for Making the Misfits

More interesting than what ended up on the screen.

Audience Reviews for Making the Misfits

There are no featured audience reviews yet. Click the link below to see what others say about Making the Misfits!