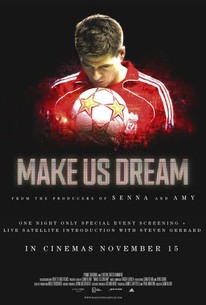 Born on the 30th May 1980 in Whiston, Merseyside, Steven Gerrard joined the Liverpool FC Academy at age 8. He left 26 years later, having won two FA Cups, three League Cups, one UEFA Cup, one FA Community Shield, one UEFA Super Cup and, in what is widely regarded as one of the most thrilling matches of all-time, one UEFA Champions League. He was named in the PFA Team of the Year a record eight times. MAKE US DREAM takes a close-up look at the man behind the legend - taking in the highs of Istanbul, the inner conflict of staying loyal to his boyhood club and the turmoil of coming agonisingly close to the trophy that has always eluded him: The Premier League. A cinematic emotional rollercoaster, MAKE US DREAM brings fresh revelations to one of the most famous personalities in world sport. Driven by an all-consuming desire to deliver for his people that would ultimately take him to the very edge, after experiencing Steven Gerrard's story through his own eyes you'll never think about elite football in the same way again.

Critic Reviews for Make Us Dream

It's Gerrard's own readiness to open up and reveal something of the agony behind the permascowl he was famous for as a player that marks this film out.

The most ardent Liverpool haters will find plenty of entertainment in the film's larger engagement with the Premier League.

Not much more than a highlights reel of an admittedly illustrious playing career.

Audience Reviews for Make Us Dream

There are no featured audience reviews yet. Click the link below to see what others say about Make Us Dream!