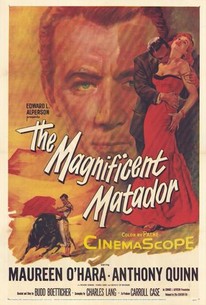 The exciting, metaphorical world of bull-fighting provides the setting for this dramatic tale of an aging toreador faced with a difficult decision after his illustrious reputation is nearly destroyed when he introduces his young rival and protege and suddenly runs from the ring. The distraught old matador finds comfort in the tender arms of an American fan. Unfortunately, her old boyfriend gets jealous and proclaims the fighter a coward. In time, the matador and his student enter the ring together for a final battle. It is here in the unforgiving arena that the true nature of their relationship is revealed. The film's director Budd Boetticher, gives the film added realism as he, a former matador, also worked as the technical advisor. Originally, the bull-fighting scenes were more graphic, but squeamish censors intervened and the scenes were heavily edited.

Jesus 'Chucho' Solorzano
as Himself

Pedro Rafael Rodriguez
as Himself

Joaquin 'Cagancho' Rodriguez
as Himself

Antonio Velasquez
as Himself

Felix Briones
as Himself

Nacho Trevino
as Himself

Jorge 'Ranchero' Aguilar
as Himself
View All

Ole! A shrill bullfight story with a contrived soap opera romance between an aging celebrated Mexican bullfighter and a fawning wealthy American.

There are no featured reviews for Magnificent Matador at this time.