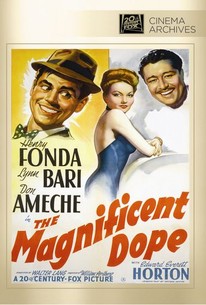 In order to be permitted to appear in "prestige" items like Grapes of Wrath and The Ox-Bow Incident, Henry Fonda had to agree to appear in such inconsequential fluff as The Magnificent Dope. On its own terms, however, this gentle satire of the "Dale Carnegie" school of self-help is pretty funny. Don Ameche plays Dwight Dawson, the owner of a success school which isn't all that successful. Dawson's secretary-sweetheart, Claire Harris (Lynn Bari), suggests a publicity stunt which might improve business -- if Dawson can make a success out of the laziest man in America, the world will beat a path to his door. After an extensive search, the perfect candidate for Dawson's academy is found: cheerful, laid-back country boy Tad Page, who prefers happiness and serenity to hard work and wealth. In true "reverse procedure" tradition, it is Tad's take-it-easy philosophy, rather than Dawson's "get up and go" dictum, that eventually wins the hearts of the American public. Fourth-billed Edward Everett Horton has little to do other than his inimitable double takes, one of which amusingly closes the picture.

William B. Davidson
as Mr. Reindel

Gladys Blake
as Another Secretary

Lawrence Wheat
as Man
View All

Critic Reviews for The Magnificent Dope

An entertaining movie, where Don Ameche and Henry Fonda are inimitable. [Full Review in Spanish]

It's a dopey Capraesque comedy that is anything but magnificent.

Audience Reviews for The Magnificent Dope

Minor comedy in Fonda's career but a pleasing jaunty one.

In a heavy handed bit of populist pandering the reliable Henry Fonda plays a small town chap unimpressed with big city ways and given to "common sense philosophizing". Don Ameche is a savvy big city entrepreneur who needs a simpleton to improve in order to make his fortune. And Lynn Bari (watching fame pass her by with a dubious script) is the big city girl in between the two. As Capra-esque as a film could be w/o Capra, you watch everything happen two scenes before it actually happens, its as predictable as that. Oh well.