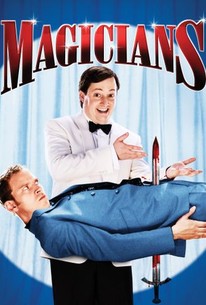 Two magicians continue to feud since their double act ended in disaster.

t's a perfectly agreeable way to while away an hour and a half -- but don't expect to remember much about it in the morning.

Perky turns from supporting thesps can't compensate for the sense that this plays like an attenuated TV episode.

It's a cruel, mean-spirited kind of humour that highlights the lack of anything resembling real wit in the screenplay.

This film is just such a wasted opportunity.

A small, but amusing little film.

Something of a disappointment, due to a poorly conceived script and an underdeveloped plot.

The bumbling charms of the stars just about pull this through, but there'll be few calls for an encore come the final curtain.

While it's endearing and occasionally inspired, it's just not funny enough.

Rich Cline
Shadows on the Wall
View All Critic Reviews (9)

Right now this is an entirely British outing using entirely British comedy stars from entirely British comedy shows, in other words, if you haven't ever seen or heard of the comedy show [i]Peep Show[/i] then chances are you probably haven't even heard of this. That's not to say this movie is based on that series, its not, but lets face it, it does kinda feel like an extended episode or spin off from the show. Yes I know I'm solely basing that on the fact the two main leads (Robert Webb and David Mitchell) are the two leads from that show but any British person who's familiar with the show knows what I mean. Right its a comedy, lets just get that out there for everyone, its a black comedy based on the relationship between two reasonably famous magicians (Harry and Karl) based in the UK. Lets think of these characters as the Torvill and Dean of the British magic world (in the film), they are a household name in the UK and pretty well known elsewhere, but mainly they are a home-grown success story that are loved by their fellow countrymen (and women and kids). So what happens next, well obviously they fall out, why? because Karl is having an affair with Harry's wife. This also leads to the accidental death (or was it?) of Harry's wife during a show, which of course virtually destroys their act. This naturally leads to the pair losing touch and going their own separate ways, until a major magic competition comes along and the pair both enter. OK so, as I've already mentioned this does feel very much like an extended episode of [i]Peep Show[/i]. Aside from the fact you have Webb and Michell, you also have at least three other people that have also starred in the show, this really does make it hard not to look upon the film as an extended special or whatever. Of course a lot of the appeal here is down to whether or not you actually like the comedy duo of Mitchell and Webb, luckily I do like the duo and have enjoyed all their work thus far. Again though this does of course cause problems because the comedy feels very familiar, very predictable and like you've seen it all before. If you like the act then that might not be a problem, but even for me as a fan, I did feel a bit of deja vu creeping in and it always felt a bit like an over long sketch. Perhaps making this idea into a six part comedy show would have been a better option? The whole concept of using magicians and having some big magic battle to find the best magician is a nice idea, it lends itself well for some great comedy. The various magicians we see are entertaining with the obvious array such as...the more traditional tux type, wacky and outlandish, rude, shock value, supernatural, funny for the kids and mind games. Harry and Karl are more traditional magicians at the start, using the more old fashioned well known tricks, but later Karl moves into mind games mixed with the supernatural trying to elevate his appeal. This does of course lead to conscious issues for him as he is of course a fake (more of a con artist than Harry), and he cannot bring himself to fool people around when it comes to their actual dead family members. This is one of the films small engaging plot devices with morals, does Karl hurt and trick people for success? can he handle that, is he willing to trick is own girlfriend into the bargain? His struggle is compelling and amusing as deep down he really doesn't want to but he finds himself getting sucked into these situations...mainly because of his fame seeking agent who also fancies him and is actually quite funny. So Webb's character is the stronger of the two, I think, as Mitchell's Harry really does feel exactly the same as Mark Corrigan from [i]Peep Show[/i]. Yes you could say exactly the same about Webb's character of Karl but I feel he displays more of a genuine story arc, he actually conveys some emotion. Where as Mitchell and his Harry/Mark characters seem pretty much the same, both are single, useless with the opposite sex, awkward, geeky and prone to outbursts. Its the other characters that are actually a bit more fun truth be told, Peter Capaldi is solid as the gruff and rude magic competition organiser, where as Steve Edge is easily the best as a controversial magician who simply doesn't think twice about speaking his mind, be it sexist or racist. I guess what I'm trying to say overall is, this film is OK, but it could of been so much better. The whole thing is self contained, its simple, the gags are generally average at best, visually its a typically British movie in the sense that it kinda looks cheap but passable, and the magic aspect is cool. I really wanted to like this film so much, I like Mitchell and Webb, their brand of humour is solid, cheeky and at times close to the bar, but this is lacking something. I think it really does show that these TV folk do work better in the TV format/realm, their comedy just works so much better and there are many examples of this. So yeah, end of the day, its a solid attempt, it does kinda work but the comedy duo can't match their TV shows for pinpoint zinger bombs I'm afraid.

I love mitchell and webb i find them so funny and love there shows so i was excited about the movie but its not as funny as id of hope Its funy and silly and the storyline is good and sort of heartwarming and is a good movie but i thinjk it could of or should of been better !! worth a watch though! David mitchell plays a magician whose an act with robert webb but when mitchell accidently chops his wife head of his career is in tatters and whilst his partner who was cheating on mitchell wife carrys on with his career , its an ok film but bug fans of mitchell and webb may be disappointed!

Mitchell and Webb are basically the same characters as usual, and just as funny, but the real treat are the secondary characters, some of whom are excellent.

Witty tail of magicians which is really an excuse to showcase the best in british comedy talent and writing.