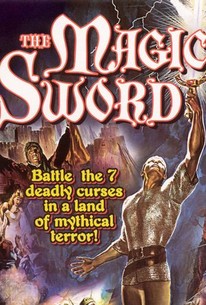 This medieval adventure fantasy has Saint George (Gary Lockwood) as the hero battling the forces of evil. He incurs the wrath of the villainous Lodac (Basil Rathbone) who uses all his dark powers to stop our hero. George fights a giant ogre, a two headed dragon, witches and rescues the fair Princess Helene (Anne Helm) from becoming dragon food.

Richard Kiel
as Pinhead
View All

Critic Reviews for The Magic Sword

Lockwood is dull and Winwood annoying, but there's no lack of imagination in the storytelling.

[Estelle} Winwood provides some campy humor (I kept thinking of Bewitched every time she was on screen)...

Silly fun with some winning performances and campy effects

Audience Reviews for The Magic Sword

A made for children fantasy film based on the legend of St. George, it is silly but surprisingly entertaining for its production.

A little bit of fun in this camp classic as a knight, Gary Lockwood, goes on a mission to save his lady fair. Against him, Basil Rathbone, hamming it up as the villain you "boo" whenever he's onscreen, a script that's unintentionally funny, near comic special effects, and ham-fisted direction. Still enjoyable ... with a joint or two to help it along.

Absurdly cheesy with performances so vapid from everyone except of pros Basil Rathbone and Estelle Winwood it would be an insult to dinner theatre acting to say it was that good . Colorful but very empty.