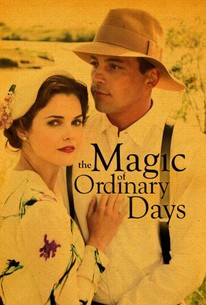 Adapted from the story by Ann Howard Creel, this Hallmark Hall of Fame presentation is set in rural Colorado in 1944. After she becomes pregnant by a departing soldier, Livy Dune, the wealthy, pampered daughter of a Denver minister (Daryl Shuttleworth), is forced to forever abandon her hopes of becoming an archeologist. To shield her from further scandal, Livy's father ships her off to a remote farm and arranges her marriage with shy farmer Ray Singleton (Skeet Ulrich), who is struggling to live up to his proscribed responsibilities to the wartime government. Clearly depressed by the situation, Livy does as well as she can to be polite and civil to her husband and his sister Martha (Mare Winningham), but it is clear that she'd rather be dead than married to a man she doesn't even know. For Ray's part, he is unfailingly generous and supplicative, but the realization that Livy doesn't want him makes him feel more inadequate than ever. With almost painful slowness, the two lost souls finally come to love and cherish one another, while each one also learns to forgive themselves for their own imagined shortcomings. A subplot involves the couple's relationship with a brace of well-educated Japanese girls living in a local internment camp. The Magic of Ordinary Days made its CBS debut on January 30, 2005.

There are no critic reviews yet for Magic of Ordinary Days. Keep checking Rotten Tomatoes for updates!

Sometimes even the mistakes we make can lead us to a better life than we couldn't ever imagine.....!!!

Typical Hallmark fare. A non-married but pregnant woman marries a farmer to protect her family name even though she still loves the WW2 flyer who got her pregnant. Will she learn to love the farmer? It is Hallmark after all.