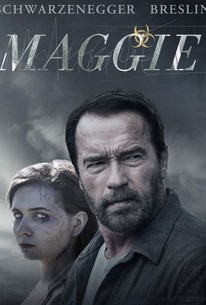 Critics Consensus: Maggie lurches a bit clumsily at times, but is partially redeemed by strong performances and an unexpectedly thoughtful tone.

Critics Consensus: Maggie lurches a bit clumsily at times, but is partially redeemed by strong performances and an unexpectedly thoughtful tone.

Critic Consensus: Maggie lurches a bit clumsily at times, but is partially redeemed by strong performances and an unexpectedly thoughtful tone.

When a deadly zombie virus sweeps the nation, a father will stop at nothing to save his infected daughter in this post-apocalyptic thriller starring Arnold Schwarzenegger and Abigail Breslin. (C) Official Facebook

Dana Gourrier
as Woman in Scrubs

David A. Cole
as Doctor

A quietly melancholic study of a father-daughter relationship playing out under the shadow of her terminal disease.

The film ladles on the melancholy so thickly that there's no space for you to feel it for yourself.

One interminably boring and mawkish film, overlaid with YA-dystopian self-pity.

Most of Maggie is so dark you can barely make out the zombies or the humans. It also moves more slowly than the ghouls.

I feel some guilt in giving a film that tries this hard a negative review. But I couldn't shake my sense of aggravation at how it all plays out, especially in Schwarzenegger's case.

A slight affair with little room for meandering, Maggie exists as a squarely predictable character piece with some relatively unpredictable central casting.

Actually Arnold's casting in this role is a remarkable fit, taking advantage of the entire world's expectations and turning them on their head to create something that feels new.

The film is precise, thoughtful, intelligent and heartfelt. In applying a new lens to a familiar genre, it feels bracingly different.

It does an excellent job of telling an effective story of strong family bonds, that just happens to involve zombies.

The connection between [Arnold Schwarzenegger] and Abigail Breslin is often very touching ... but the plot is thinly spread and the pacing drags too often.

Maggie has the necessary ingredients to draw itself away from being a typical undead outing, but they turn out to be the very thing that wounds it.

Slow but pretty interesting take on the zombie genre. As his daughter gets infected and slowly turns into a threat, a father has to start coping with it, while the girl tries to live a normal teenager for as long as she can. Nicely filmed and well acted, only the solution falls a bit short. There are a few pretty touching scenes, though. Definitely Arnie's most unusual film.

It's a whole film about saying goodbye, particularly to one's child, herein taken slowly, bit by bit, by ... but it doesn't matter much at all. Saying goodbye, nobody wants it. Ah-nold throws down some real acting and surprises. Breslin is capable. One for the ages, despite its slow pace.

The premise is a tad too familiar and nothing that hasn't been shown before in The Walking Dead or George Romero's movies, but Hobson makes up for it by sustaining an oppressive, relentless atmosphere of melancholy despite the film lacking in plot (and character) development.