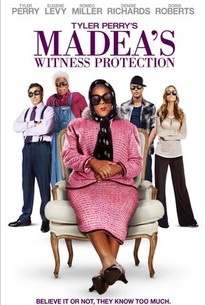 For years, George Needleman (Levy), the gentle CFO of a Wall Street investment bank, has been living with his head in the clouds. But George is finally forced to wake up when he learns that his firm, Lockwise Industries, has been operating a mob-backed Ponzi scheme - and that he's been set up as the fall guy. Facing criminal charges and death threats from the mob, George and his entire family are put under witness protection in the safest place that Brian (Perry), a federal prosecutor from Atlanta, can think of... His Aunt Madea's house down South. -- (C) Lionsgate

George's son asks for Wi-Fi, and Madea says, ''Sure, I can make you a waffle.'' That's one of the good jokes.

He's still a young guy, but all throughout Witness Protection I imagined Perry sitting glumly at a dressing-room mirror, like the aging Chaplin in Limelight, forlornly rubbing makeup in his face -- a tired, old clown stuck in a tired, old routine.

Reviewing a Tyler Perry movie is a bit like reviewing the weather report.

Tyler Perry doesn't have to make sense, or a have a point. He's laughing all the way to the bank.

The interaction among opposites inspires an abundance of predictable race-based jokes, many of which have the saving grace of actually being funny.

It's a big mess of a film, but it isn't totally a wash because Madea the character is good enough to milk a few laughs here and there.

The acting talent in this film is minimal. Forced dialogue and frequent lame jokes weigh down this Madea film, making the nearly two-hour feature unbearably long.

Unambitious and evaporates almost as rapidly as it plays out, but at least it knows what it is and only has one aim: to divert viewers for two hours.

The frantic seventh installment in this highly successful comedy franchise is filled with throwaway gags and self-conscious scenes.

His best and most agreeable Madea comedy.

Much of the film doesn't even play as Tyler Perry, but as yet another example in the evergreen "Eugene Levy slumming it for a paycheck" subgenre.

I like pretty much all of Tyler Perry's movies. Even when they get too melodramatic, they are still pretty entertaining. "Madea's Witness Protection" is his latest in a long line of movies about Madea(Perry in drag). This time Madea takes in a family from New York who are under an FBI investigation while they and receive death threats from the mob. This is a straight up over the top comedy, with zero drama like all of his other movies. While that's kind of a breathe of fresh air, the comedy falls flat a lot. The cast is pretty weak. Eugene Levy is ok, but he is just playing himself, and he's married to Denise Richards. Yeh, it don't make sense to me either. There's a lot of plot holes, and the movie only really works when Madea is on screen. Even though too much of her(or him), gets to be annoying after a while. This is probably my least favorite of the Madea movies, and hopefully if they make more they get better. Watch if your a fan, but skip otherwise.

Not as enjoyable as some of his other films. 2 stars

Funny premise. I think Tyler Perry is quite subversive and for that I love him--sending up ponzi scheme guys, sending up hypocrisy in all shades of black and white. I don't think he's what my friends would call politically correct, so he may have to remain my guilty little pleasure.

"Still making these movies... Well at least this one was a little funny. I don't understand why he doesn't put together a better script and a better cast of actors? The movie was just something to watch to pass the time. It wasn't awful nor was it one of the better comedies I have seen this year. It's the same show with different jokes and a different situation. All these movies seem to mesh into one big old mess. I've like a couple of them, but none that are worth mentioning again. Once again, a film of his I will only watch once."