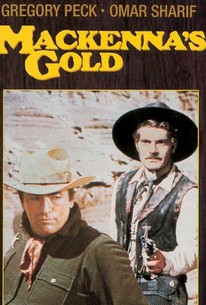 Gregory Peck plays a sheriff in this western, though he's seeking gold instead of protecting a one-horse town. After making his way past several desperadoes (played by Burgess Meredith, Lee J. Cobb, Eli Wallach and Edward Robinson), he vies for the treasure with his nemesis (Omar Sharif). Also lending their talents are Julie Newmar, best-known as Catwoman on the Batman TV series, and Quincy Jones, who provides the score.

Lee J. Cobb
as The Editor

Raymond Massey
as The Preacher

Burgess Meredith
as The Storekeeper

Shelley Morrison
as The Pima Squaw

Sagging and sprawling all over the landscape.

There are no featured audience reviews yet. Click the link below to see what others say about MacKenna's Gold!