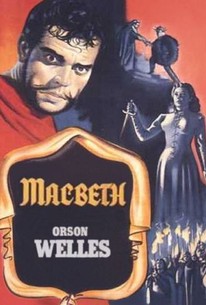 Critics Consensus: This haunting, eccentric Macbeth may be hampered by budget constraints, but Orson Welles delivers both behind and in front of the camera.

Critics Consensus: This haunting, eccentric Macbeth may be hampered by budget constraints, but Orson Welles delivers both behind and in front of the camera.

Critic Consensus: This haunting, eccentric Macbeth may be hampered by budget constraints, but Orson Welles delivers both behind and in front of the camera.

In this adaptation of Shakespeare's tragic tale of the rise and fall of ambitious 12th-century Scottish warrior MacBeth, Orson Welles stars in the title role, with his old radio colleague Jeanette Nolan as Lady MacBeth. Dan O'Herlihy plays MacDuff, Roddy MacDowell is Malcolm, and Edgar Barrier the unfortunate Banquo.

Alan Napier
as A Holy Father

Gus Schilling
as A Porter

Only a few of the Bard's best lines are audible. The rest are lost in strained, dialectic gibbering that is only sound, not prose.

Wonder-Boy Welles has an imaginative way with a camera.

One of the director's most personal creations, it's a courageous experiment with a craggy barbaric splendor all its own.

There is force in this rough, hasty rendering; the sheer speed of the pacing gives it a quality of crushing delirium.

Adventurous film-making that takes risks, and full of imaginative flourishes.

Visually, there are two or three fine rousing climaxes, but on the whole I found this effort disappointing -and, in spots, well-nigh ludicrous.

The graphic intensity of Orson Welles' black-and-white 1948 film of Macbeth, then, isn't merely for show, but a carefully considered symbolist staging for screen, meant to complement the Bard's immortal poetry.

a film that had an unfortunately deleterious effect on Welles's career, but can now be seen and appreciated as a unique, daring take on a familiar text that rendered it new and strange

Welles brings his usual first-rate shadows, mist, and deep compositions, but Macbeth is both strangely pat and frequently hammy otherwise.

Another inspired, original work by one of the true artists in American cinema. Welles makes excellent use of his small budget, producing a film that is both stylish and surprising. He does things with the play that are unusual, and that's part of what makes his piece so exciting to watch. An absorbing visual marvel.

Hor-rors. This may be the worst version I've ever seen. To reiterate, this is my favorite of Shakespeare's plays, so I'm most critical when I watch a production. Worse still for Orson Welles, I was just iPoding the Arkangel recording while I was walking the Great Wall in China last week, so the play's all the more fresh in my mind.

It's as if Welles thinks he's always doing Citizen Kane -- don't get me started. You don't have to emote, okay, you have to deliver. The words carry enough drama all by themselves, all right? Yet one more reason why Welles will never make either my favorite actor or my favorite director lists.