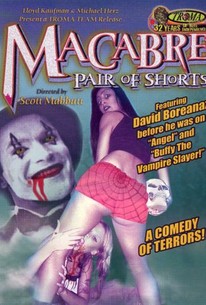 Troma founders Lloyd Kaufman and Michael Herz continue to push forward into the realm of the bizarre, surreal, and campy with the 1996 feature film, Macabre Pair of Shorts,a self-proclaimed "comedy of terrors" written and directed by Scott Mabbutt. Done in the mold of such horror comedy classics as Creepshow and Tales from the Darkside: the Movie, Macabre spoofs traditional horror conventions while delivering a hair-raising fright-fest. The premise relays the events that unfold one Halloween night when a couple of adventurous cinephiles discover an exceedingly strange reel of film at a motion picture equipment facility. Threading it up on the projector, they suddenly unleash a wacky, B-movie style parade of horrors -- from crazed monsters to insatiable blood-sucking female vampires.

There are no critic reviews yet for Macabre Pair of Shorts. Keep checking Rotten Tomatoes for updates!

There are no featured reviews for Macabre Pair of Shorts at this time.