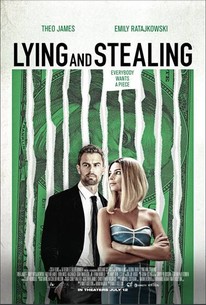 LYING AND STEALING is set in Los Angeles, a city where perception is often more important than reality. This is the world that IVAN lives in -- the poseurs and the social climbers, the wannabes and the rich who flaunt their wealth because they too want to remake themselves. But Ivan is not a wannabe. Ivan is an art thief. He inherited his father's life of crime, but unlike most thieves, Ivan loves the art as much as the art of the steal. More than that, he longs to break free from the criminal world. Ivan's problem is that he's in so deep he may never get out of the devil's bargain he made with a vain and sadistic crime boss. That is until he meets Elyse, an actress and a con-woman with her own chaotic past she wants to escape from. Together, they team up to pull off the ultimate con/heist which won't make them rich, but will hopefully set them free.

Critic Reviews for Lying and Stealing

The jaunty, neo-noirish crime outing "Lying and Stealing" has its moments - chiefly the engaging performances of sexy leads Theo James and Emily Ratajkowski - but is too short on depth and logic to prove much more than a glossy, forgettable trifle.

A mostly satisfying entry in the art heist genre.

Yet even given its budgetary limits and second-tier cast, "Lying and Stealing" manages to be a retro escapist pleasure - one whose cleverness might actually have been muffled by flashier surface assets.

It's all been done before, but the reason it's worth watching is to see James do it again.

As far as fakes go, it's not half-bad. But if it has your full attention, it only takes a few moments of eye-squinting and chin-rubbing to recognize it as Dr. Thunder...

Matt Aselton doesn't break any new ground with his art heist thriller, but he still packages some fast-paced, B-movie fun.

The thrill of seeing good thieves at work, combined with the leads' chemistry and the tension building score, make for an enjoyable, if shallow, film experience.

This heist comedy struggles to modulate disparate tones as it transitions into a darker and more violent crime thriller.

What a waste of handsome people. These lead actors deserve so much better movies than a reheated crime caper.

There are no featured reviews for Lying and Stealing at this time.