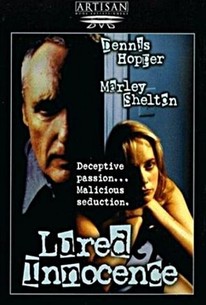 Newspaper reporter Elden Tolbert (Devon Gummersall) returns to his rural hometown to cover the climactic courtroom drama of the small town's major scandal: Elsie Townsend (Marley Shelton), a beautiful young waitress at the local diner, has been accused of murdering Marsha Chambers (Talia Shire) and is on trial. As it happens, Tolbert is a former lover of Elsie's, and winds up as a witness called to testify. In flashbacks, the murky story becomes slightly clearer, as it looks as if the slaying was the mutual idea of Elsie and the dead woman's seriously bored, middle-aged husband, Rick (Dennis Hopper), who is trying his best to stay out of it.

There are no critic reviews yet for Lured Innocence. Keep checking Rotten Tomatoes for updates!

There are no featured reviews for Lured Innocence at this time.