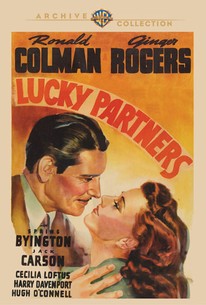 Lewis Milestone directs the lightweight romantic comedy Lucky Partners, based on a story by Sacha Guitry. David Grant (Ronald Colman) is an artist in New York's Greenwich Village. After he wishes good luck to passing ingenue Jean Newton (Ginger Rogers), she is immediately offered a beautiful dress. Thinking that David is lucky, she agrees to go in with him on a ticket for the Irish Sweepstakes. Their horse wins the race, and he asks her to accompany her to Niagara Falls to celebrate their winnings. Jean's fiancé, Freddie Harper (Jack Carson), is not pleased about the arrangement, so he follows them. Eventually Jean and David fall for each other and they end up in the courthouse, where the judge ($Harry Davenport) sorts everything out in favor of the new couple. Lucky Partners was released in 1940, the same year Rogers gave her Oscar-winning performance in Kitty Foyle: The Natural History of a Woman.

Leon Belasco
as Nick No. 1

Eddie Conrad
as Nick No. 2

Dorothy Adams
as Maid in Apartment

Dorothy Vernon
as Woman on Bus

There are no critic reviews yet for Lucky Partners. Keep checking Rotten Tomatoes for updates!

Cute if improbable comedy with Ronald Colman and Ginger working well together.