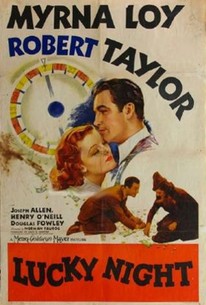 An heiress gets a crash course in the simple life when she marries a penniless man in this comedy. Calvin Jordan (Henry O'Neill) is the prosperous owner of a successful steel mill, and the apple of his eye is his daughter Cora (Myrna Loy). Cora stands to inherit Calvin's firm, and he's taken it upon himself to find a good husband for her. However, free-spirited Cora doesn't think much of her father's skills as a matchmaker, and makes it clear she's going to marry whomever she pleases. One day, Cora meets Bill Overton (Robert Taylor), a jobless and homeless man camping out on a park bench. After bumming fifty cents from a cop, Bill offers to take Cora out to dinner; instead, they end up gambling, and turn the four bits into a bankroll. After a few too many celebratory drinks, Bill and Cora decide true love and good fortune are shining upon them, and they get married the same evening. However, the next day the newlyweds realize they are indeed husband and wife, and after defying her father Cora can't count on her dad's help in paying the bills anymore.

Edward Gargan
as Cop in Park

Donald Kerr
as Seller in Arcade

Baldwin Cooke
as Waiter in George's

There are no critic reviews yet for Lucky Night. Keep checking Rotten Tomatoes for updates!

There are no featured reviews for Lucky Night at this time.