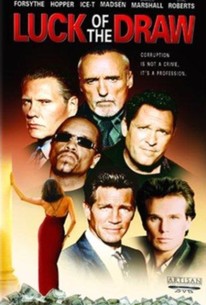 Luck of the Draw Photos

This stylish crime thriller concerns a former criminal trying to set himself on the straight and narrow, until he happens upon a set of bootleg printing plates for $100 bills and soon finds himself a wanted man by both sides of the law. Luck of the Draw (also known as Quicksand), stars William Forsythe, Dennis Hopper, and Ice-T. The film gained some unusual press attention while it was being filmed when Mickey Rourke was fired from the project, reportedly because he refused to play a scene without his pet Chihuahua (the role was recast with Michael Madsen).

Critic Reviews for Luck of the Draw

Audience Reviews for Luck of the Draw

Incongruous title, movie has nothing to do with poker or cardsplaying, instead it's about stolen counterfeit $100 printing plates and features a cast worthy of the B-movie Hall-Of-Fame: Dennis Hopper, Michael Madsen, Eric Roberts, Ice T, and William Forsythe all chewing up the scenery with equal amounts of glee. The lamest characters are the no-name lead and his vanilla girlfriend! Sit back and take in some decent car stunts, over-the-top gunfights, riotous profanity-laced rants, a sprinkling of gratuitous nudity, and some predictably unpredictable double-crossing, what more could you want from a direct-to-DVD timekiller?

Luck of the Draw Quotes