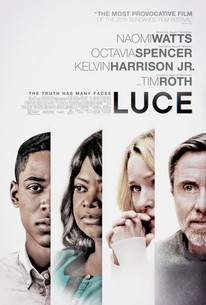 Critics Consensus: Luce brings a stellar ensemble to bear on a satisfyingly complex story that addresses its timely themes in thought-provoking fashion.

Critics Consensus: Luce brings a stellar ensemble to bear on a satisfyingly complex story that addresses its timely themes in thought-provoking fashion.

Critic Consensus: Luce brings a stellar ensemble to bear on a satisfyingly complex story that addresses its timely themes in thought-provoking fashion.

It's been ten years since Amy and Peter Edgar (Naomi Watts and Tim Roth) adopted their son from war-torn Eritrea, and they thought the worst was behind them. Luce Edgar (Kelvin Harrison Jr.) has become an all-star student beloved by his community in Arlington, Virginia. His African American teacher, Harriet Wilson (Octavia Spencer), believes he is a symbol of black excellence that sets a positive example for his peers. But when he is assigned to write an essay in the voice of a historical twentieth-century figure, Luce turns in a paper that makes an alarming statement about political violence. Worried about how this assignment reflects upon her star pupil, Harriet searches his locker and finds something that confirms her worst fears.

Astro
as Deshaun Meeks
View All

Adapted by Onah and JC Lee from Lee's play of the same name, it's chilling and provocative, sharply written and sensationally acted by a cast of big-hitters and unknowns.

It's Spencer's performance that ends up packing most of the film's heat. Where the other characterisations dither or flip-flop, hers deepens, intensified and shaken by the war of ideas.

Staginess stalks the enterprise throughout, a prowling figure in an opera cape, and ends by strangling everyone with the cords of loquacity, moralism and story contrivance.

Luce feels theatrical in the wrong way: muddled and contrived.

A convincing and confidant example of sustained menace.

This earnest race drama occasionally flirts with turning into a sociopath thriller. You'll kind of wish it did.

It's a film that wants you to remain as unsure of yourself as you are of the people it introduces - all the while insisting you fill in the gaps and provide the answers.

This is a really chilling psychological thriller that illuminates racism in American in a different way than more common approaches. It asks, 'What is the cost of submerging one's identity, history and race in order to conform to white standards?'

There's a rare intelligence to this film, which explores issues around race, wealth, class, gender and what it means to be a real American in a nuanced, multifaceted way.

This smart, racially-charged drama digs into the underbelly of our woke age.

... almost made me indifferent to the topics in question, as well as unfulfilled.

Watts and Spencer have some excellent scenes, crackling with energy and unarticulated tension, but the language can feel overburdened with significance.

There are no featured reviews for Luce at this time.