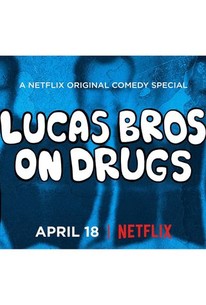 For their debut Netflix comedy special, The Lucas Brothers provide a fresh take on their signature laid-back humor. Filmed at The Bell House in New York, they school the audience on twin stereotypes, plot their ingenious plan to solve pay inequality in America, grapple with paying off their law school debt, and call out the consequences of Richard Nixon's war on drugs.

Their material ranges from "juicy" O.J. Simpson puns to a hilarious two-way phone call between Michael Jordan and Charles Barkley about "Space Jam."

For 49 minutes or so, if you want to hit pause on life, Lucas Brothers got you covered.

It's sharp, smart, insightful and hilarious.

The Lucas Bros. seem unwilling to do things by the book, and thoroughly distinguish themselves from other cookie-cutter Netflix specials in the process.

There are no featured reviews for Lucas Brothers: On Drugs at this time.