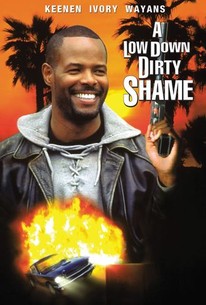 A Low Down Dirty Shame Photos

A black detective becomes embroiled in a web of danger while searching for a fortune in missing drug money in this action-comedy. Writer-director Keenan Ivory Wayans also stars as Los Angeles private eye Arthur Shame, a former cop whose troubled past resurfaces when a one-time colleague asks for help in a narcotic case. During the course of his investigation, he encounters various old connections, ultimately confronting the criminal responsible for Shame's expulsion from the force. He must also deal with two women, Angela, a beautiful old flame (Salli Richardson), and Peaches (Jada Pinkett), his energetic but annoying sidekick. Unlike Wayans' blaxploitation parody I'm Gonna Get You Sucka, A Low Down Dirty Shame sticks more closely to genre conventions, lightening the action with wisecracks and standard comic interludes.

Robert Schimmel
as The John

Andrea Evans
as Denise
View All

Critic Reviews for A Low Down Dirty Shame

In terms of action, Wayans the director relies too much on slow-motion in shooting action scenes -- a tiresome habit that undercuts the potential excitement of some sequences.

So far, so hackneyed.

Mr. Wayans is an agreeable screen presence, but he makes a surprisingly bland action hero.

Wayans isn't sure whether to send up Shaft and company or simply to remake the action thriller. The result is an embarrassing compromise.

Here is a movie about guns. Take away the guns, and the movie would be about nothing much.

It's easy -- far too easy -- to use the title of Keenen Ivory Wayans' latest movie as a description. Unfortunately, it's also accurate.

Wayans can be funny, but an action hero he is not.

Wayans the screenwriter is largely to blame for the film's shortcomings, but Wayans the director does a solid job.

The comedy is hit-or-miss, while Wayans proves to be a huge fan of Hong Kong action flicks, ripping off a number of action sequences from them.

Question of the day: why is there such an appeal to brainlessness?

Unfortunately, however, where I'm Gonna Git You Sucka was completely off the wall, A Low Down Dirty Shame is just off.

I'm not sure what type of movie this is supposed to be or who its audience is, but it's a low down dirty shame that Wayans' talent is wasted on this film.

Audience Reviews for A Low Down Dirty Shame

Peaches : Shame might be soft on you, but I can see through all that Maybelline. And you ain't nothin' but a gold-diggin' skank, tryin' to get a man for all he's worth. You hurt Shame again, you betta watch yo' back! Shame: I'll go take me a shower and pretend that I didn't wake up in The Crying Game! Shame (played by Keenan Ivory Wayan) is a former cop now a private detective with, who is broke. When an old friend offers him a job to track down a criminal who Shame believes he had killed, he takes the case for personal as much as financial reasons and soon finds himself in a whole world of trouble. Meanwhile his sassy secretary Peaches (a hilarious Jada Pinkett), tries to help him but the sexual tension between them also proves to be a distraction. My favorite part was when Peaches punched out a soap opera actor Brad because his character had sex with one of the other characters that she didn't like haha. Another funny scene is when Shame has a couple dogs chasing him and he started singing a song by James Brown to calm them down. (Well they do say music sooths the savage beast lol) And what about that bedroom scene when he wakes up next to ~Girlfriend~

Not bad action-comedy of Keenen Ivory Wayans' film. Jada Pinkett's animated performance as Shame's fast-talking girl Friday is one of the few outstanding elements in this otherwise so-so spoof of blaxploitation pictures.

i am chuy yung phat, do you know what this means? yea, it means you come with an egg roll and mi so soup.

This comedy is either a hit-or-miss

A Low Down Dirty Shame Quotes