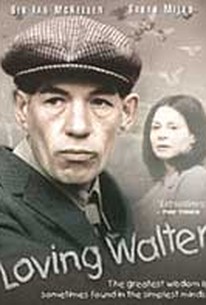 Director Stephen Frears' Loving Walter combines 1982's Walter, produced for Britain's Channel Four, and its sequel, 1983's Walter and June. Based on the best-selling book by David Cook, the story details the plight of Walter (Ian McKellan), a moderately retarded man, after the deaths of his parents. No concrete provisions have been made for Walter's upkeep, so he is thrown into an institution, where for the first time he is subjected to the casual cruelties of the "normal" world. Walter is rescued from an uncertain future through the love of June, played by Sarah Miles. Frankie Connolly plays the young Walter, while Arthur Whybrow and Barbara Jefford are his parents. ~ Hal Erickson, Rovi

There are no critic reviews yet for Loving Walter. Keep checking Rotten Tomatoes for updates!

There are no featured reviews for Loving Walter at this time.