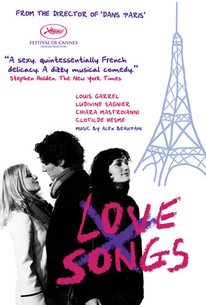 Critics Consensus: Love Songs is hampered by a lack of focus, but held together by Honore's deft direction and an engaging cast.

Critics Consensus: Love Songs is hampered by a lack of focus, but held together by Honore's deft direction and an engaging cast.

Critic Consensus: Love Songs is hampered by a lack of focus, but held together by Honore's deft direction and an engaging cast.

Though Love Songs (aka Les Chansons d'Amour) is not a film operetta per se, director Christophe Honoré and composer/lyricist/vocalist Alex Beaupain use that film to pay homage to the French movie musical as conceived by Jacques Demy in his classic Les Parapluies de Cherbourg (1967). The Honoré film concerns a series of hopelessly romantic Parisian characters who are unable to convey their feelings to one another in everyday situations, and who thus use musical numbers as outlets -- as vehicles of emotional expression. Beaupain composed the score; a number of the songs that are included appeared on one of his solo albums. The individual stories covered in the film tell age-worn tales as old as time: the loss of love, the discovery of new love, the impossibility of mutual love. The film stars Louis Garrel, Ludivine Sagnier, Chiara Mastroianni, Clotilde Hesme, Grégoire Leprince-Ringuet, Brigitte Roüan, Jean-Marie Winling, and Yannick Renier.

Sylvain Tempier
as Cop No. 1

Guillaume Clérice
as Cop No. 2

Alex Beaupain
as The Singer
View All

Conceived by Honore as a tribute to a dead friend, the helmer is perhaps too close to his subject, never quite able to bring himself to linger on the grief that should be at pic's core.

It's a story which Honoré describes as personal, so we must assume that there is some truth at least in the premise. But the decision to set the story to music undermines the emotional honesty that the piece might otherwise have had.

This inexpressibly tender and lovely picture suggests that [Honoré's] developing into a major talent, one who can make the spirit of classic French movies come alive in a new world.

As dark as these themes seem, in Honoré's capable hands, they become almost frothy and the perfect elements for a surprisingly joyous musical.

Yes, it's weird. But it's wild card weird, with that thrill of never knowing what's coming next or when these Parisians are going to get musical on us.

Offers a feast for the mind and the heart, overwhelming the senses and transporting us into its delicately constructed rhythms.

Despite a fine pedigree, this film never quite reaches the needed crescendo, and unlike Demy's classic it doesn't leave you crying out for an encore. Still worth a look though.

With both of these in mind, I do see Love Songs as a worthwhile offering in a mostly forgotten genre for which I hold deep affection.

The terrific credit sequence sets the tone and the movie almost catches up.

Another pansexual odyssey from Christopher Honoré; this one has singing

Sweetly plays on stereotypes of the French as obsessed with romance, or at least movie musicals, so regardless of any consistency or logic, love and singing conquer all.

The songs are mostly nice (when the lyrics are not so irritatingly pretentious), but the film seems to wander around without a clear sense of purpose, conviction and focus, while also being way too bleak and downbeat for its own good with its blueish, monotonous visuals.

While it never remotely aproaches the greats of "Les Parapluies de Cherbourgh", which it borrows heavily from, it is a charming little musical with a surprise twist at the end.