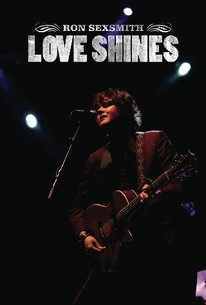 Ron Sexsmith is one of Canada's most celebrated singer/songwriters, and his smart, thoughtful and tuneful compositions have earned him the praise of contemporaries such as Elvis Costello, Sheryl Crow, Feist, Steve Earle and many more. However, while Sexsmith has a loyal following in Canada, he's never enjoyed much commercial success in the rest of the world, and as the boyish musician approaches middle age, his chances of scoring a breakthrough hit in a music industry obsessed with youth grow smaller with each passing day. For his twelfth album, Long Player Late Bloomer, Sexsmith hoped to better his commercial prospects by working with Bob Rock, a well-established producer who has crafted hit albums for Metallica, Aerosmith, Motley Crue and Bon Jovi. In the documentary Love Shines, filmmaker Douglas Arrowsmith offers a behind-the-scenes look into Sexsmith's creative process as he and Rock assemble the pieces that will become Long Player Late Bloomer, as well as dealing with the stress and creative challenges of their long days in the studio. The film also offers a glimpse into Sexsmith's life off stage as he struggles with self-doubt, stage fright and panic attacks, even as his more famous peers sing his praises. Love Shines received its United States premiere at the 2011 South by Southwest Film Festival. ~ Mark Deming, Rovi

In many ways, the doc itself is drenched in melancholy, but completely captivating.

An intimate portrait...Doug Arrowsmith takes the camera into the studio sessions.

Arrowsmith crafts a psychologically dense portrait of an artist whose single-minded pursuit of commercial success threatens to overwhelm his art.

The film is not, in fact, an examination of Sexsmith's psyche, his childhood or his "melancholy." It is instead an appreciation and observation of his process.

There are no featured reviews for Love Shines at this time.