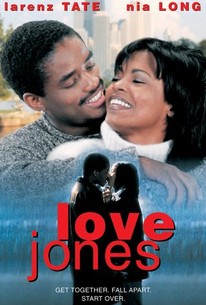 What do you do after love at first sight? That's the question posed in this romantic comedy-drama set in Chicago. Darius Lovehall (Larenz Tate) is a novelist who is giving a reading at the Sanctuary, an upscale club presenting jazz and poetry to a bohemian clientele. Shortly before his set, he meets Nina Mosley (Nia Long), a woman who is a gifted photographer, despite the fact that she just lost her job. They exchange small talk, and Darius makes his interest clear when -- on the spot -- he retitles a love poem "A Blues For Nina." A mutual attraction is sparked between them; soon Darius finds Nina's address on a check and shows up unannounced at her apartment, a visit resulting in a photo session that turns seriously sexy. So far, so good, but neither Darius or Nina are sure where to go next after this promising start. She's just gotten out of a relationship and isn't sure if she still cares for her old boyfriend or not, while Darius' buddies read him the riot act for wanting to give up his freedom so early on in the game. Love Jones was the debut feature for African-American writer and director Theodore Witcher; Isaiah Washington, Bill Bellamy, and Lisa Nicole Carson lead the supporting cast. ~ Mark Deming, Rovi

Reginald Gibson
as Himself

Helena Echegoyen
as Woman on Train

Malik Yosef
as Himself

The two leads click throughout in a movie that's just good enough to engender curiosity over filmmaker Witcher's follow-up effort.

Larenz Tate, who played a homicidal in Menace II Spciety and haunted Vietnam vet in Dead Presidents, became an important transitional figure in the new black middle-class cinema, beginning this film, in which he's cast as a sophisticated and urbane man

An uncommonly smart and insightful look at relationships while delivering the requisite laughs and romantic heat.

love jones strives to be smart and sophisticated, which isn't exactly the same thing as intelligent ...

A movie that you feel, and with characters you grow to really care for. I understand why this has developed a cult following. It's kind of a '90s gem.

Acceptable comedy that probably received good reviews for being an earnest effort by a first time director. Where did that director go by the way?

Get Together. Fall Apart. Start Over.

man, its been years since ive seen this, too many to really remember much of anything about the flick, except that i remember it having a charm to it and this is one of the films that started me in on a small crush on nia long.