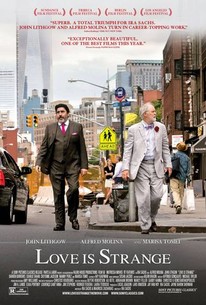 Critics Consensus: Held aloft by remarkable performances from John Lithgow and Alfred Molina, Love Is Strange serves as a graceful tribute to the beauty of commitment in the face of adversity.

Critics Consensus: Held aloft by remarkable performances from John Lithgow and Alfred Molina, Love Is Strange serves as a graceful tribute to the beauty of commitment in the face of adversity.

Critic Consensus: Held aloft by remarkable performances from John Lithgow and Alfred Molina, Love Is Strange serves as a graceful tribute to the beauty of commitment in the face of adversity.

After nearly four decades together, Ben (John Lithgow) and George (Alfred Molina) finally tie the knot in an idyllic wedding ceremony in lower Manhattan. But when George loses his job soon after, the couple must sell their apartment and - victims of the relentless New York City real estate market - temporarily live apart until they can find an affordable new home. While George moves in with two cops (Cheyenne Jackson and Manny Perez) who live down stairs, Ben lands in Brooklyn with his nephew (Darren Burrows), his wife (Marisa Tomei), and their temperamental teenage son (Charlie Tahan), with whom Ben shares a bedroom. While struggling with the pain of separation, Ben and George are further challenged by the intergenerational tensions and capricious family dynamics of their new living arrangements. (c) Sony Classics

Anahi Vidal
as Girl
View All

News & Interviews for Love Is Strange

View All Love Is Strange News

Critic Reviews for Love Is Strange

Love is strange and so is this movie, but in a good way. It's so low key that you barely notice when big things are happening.

The emotion is in the writing and in the story. The actors realise that it's the details which count here -- the looks and gestures -- not the showy speeches.

It starts with a marriage. A marriage which is also, unexpectedly, an ending of sorts, although you wouldn't know it from the hum of warmth and goodwill that surrounds Ben (John Lithgow) and George (Alfred Molina).

Get ready to feel your heart skip.

Would love to see another movie about these two characters.

Molina and Lithgow are both superb: two crusty romantics searching for crumbs in a world, however well-meaning, that is too busy for love unless it comes tidy, manageable and vexation-free.

Sachs takes Love is Strange into a territory where elliptical storytelling puts a stranglehold on any chance of building an affection for Ben and George.

Director Ira Sachs delivers what is perhaps his most heartfelt and warmly observed film thus far.

Sachs has crafted something universal and resonant, a Bittersweet, funny and ultimately moving film that shows that even though love may be strange, it's never anything short of beautiful.

Charming, warming and occasionally frustrating. Love is Strange is transformed from a warm stage play into an honest, beautiful love story by its two outstanding leads.

As dire as things become, there's an elegance to the way it all unfolds with cinematographer Christos Voudouris making New York feel as loosely comfortable as he made Greece appear in "Before Midnight".

Lithgow and Molina convey the body language of a longtime couple to such a degree that they effortlessly become part of the film's fabric.

Audience Reviews for Love Is Strange

A gay couple is forced to move into separate apartments when their marriage threatens the sensibilities of one's employer. An acting master class by John Lithgow and Alfred Molina with a fine supporting performance by Marissa Tomei highlight this softly moving story. The main conflicts are sometimes funny and sometimes quite dramatic and always genuine. Both main characters' loneliness figures prominently in the film's action, and its rendering is quite touching. While the film is "issue-driven," dealing with the injustices inflicted against gays and the affordability of real estate in Manhattan, it stays focused on the characters, which is its primary strength. Overall, Lithgow and Molina together create a gem.

A heartbreaking, inspiring and timely depiction of family, love and relationships in myriad forms. Understated but powerful performances, delivered with dignity and all the failings humankind is subject to, reflecting the often unforeseen human costs of injustice. A superb family drama. This film shows that love is not as strange as the the people who love -- or as beautiful.

American director Ira Sachs' work is clearly a movie made for devotees of reflective film and not mainstream box office. Sachs also co-produced and writes this account of disparate relationships. The fabricated arrangement gives way to some admittedly contrived situations manufactured in the interest of extracting a reaction. Alfred Molina and John Lithgow are extraordinarily good as the displaced couple. They lend a gravity to their characters that raise this chronicle to a higher level. Despite the narrative's handling of the hot button topic of same sex marriage, the real story exploits genuine emotion as it deals with the many-sided personalities in an extended family. This is a subtle production that has universal appeal. Whether they're singing at a piano to guests at a party or reflecting on what has become of their lives in separate bunk beds, Molina and Lithgow give nuanced performances. Yet the script accomplishes so much more. Love is Strange is a well written drama that beautifully handles the observational insights of a family tree and the way a simple crisis affects its many branches. fastfilmreviews.com