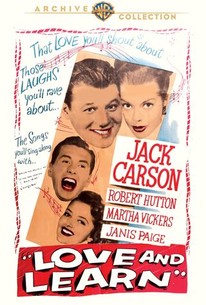 Jack Carson and Robert Hutton make a curious but copacetic comedy duo in the Warner Bros. musical Love and Learn. The stars are cast as Jingles and Bob, a pair of would-be songwriters hoping to get a break on Broadway. Along comes Barbara Wyngate (Martha Vickers), a wealthy young woman who hopes to make it on her own in the Big Apple. Hiding her true identity, Barbara helps the boys behind the scenes without their knowing it. Inevitably, Jingles and Bob clash over Barbara's affections, a problem that isn't resolved until the last possible moment. Craig Stevens, TV's future Peter Gunn, is featured in another of those "stuffed shirt" characterizations in which he was then specializing at Warners.

Critic Reviews for Love and Learn

Some labored nonsense about a Park Avenue heiress and two penniless song-writers gets the scuffled work it deserves from Martha Vickers, Janis Paige, Jack Carson, and Bob Hutton (that ersatz Jimmy Stewart).

There are no featured reviews for Love and Learn at this time.