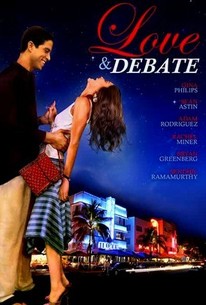 JEEPERS CREEPERS' Gina Philips stars in this drama as Jordan Landa, a young woman straddling adolescence and adulthood as well as her dual identities as a Jew and a Latina. As a senior in high school, she realizes her goal of becoming one of the top debaters in America, but love threatens to get in the way. LOVE AND DEBATE also stars Sean Astin (The Lord of the Rings films), Adam Rodriguez (CSI: MIAMI), and Bryan Greenberg (BRIDE WARS).

Critic Reviews for Love and Debate

There are no critic reviews yet for Love and Debate. Keep checking Rotten Tomatoes for updates!

Audience Reviews for Love and Debate

There are no featured audience reviews yet. Click the link below to see what others say about Love and Debate!