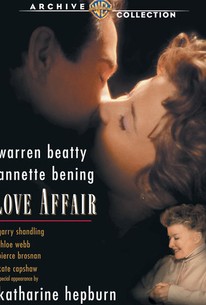 Robert Towne and Warren Beatty wrote this remake of Leo McCarey's 1939 comedy/drama Love Affair (which McCarey also remade in 1957 An Affair To Remember). This time the stars are Beatty and his wife Annette Benning, playing a couple who meet and fall in love even though each one has commitments to another. (Katharine Hepburn returns to play Beatty's aunt after a ten-year absence from the screen.) Cinematography by Conrad L. Hall; score by Ennio Morricone.

Ed McMahon
as Himself

Lisa Edelstein
as Assistant at Studio

Mary Hart
as Herself

John Tesh
as Himself

Steve Kmetko
as Himself

Terry Murphy
as Himself

Barry Nolan
as Himself

Ray Charles
as Himself
View All

Love Affair' takes such pains to dodge vulgarity it forgets to put anything in its place.

Love Affair depends on grace and style to make its effect, and that's just as well, because most of the people seeing this movie are going to know how it turns out.

Where else can you hear Kate Hepburn say the "F" word?

So sad this is Hepburn's last performance.

This is one love affair not worth remembering...tepid and unsure of its slow-witted pacing. It's any wonder that Beatty and Bening didn't hinder their real life relationship with this lovey-dovey tripe

Almost redeemed by its beautiful cinematography and Katharine Hepburns' cameo.

Too slow, both leads seem self-conscious.

Love Affair is unapologetically sappy, but its old-school humility provides a lot of its considerable charm.

Adequate remake of An Affair to Remember, pleasant but little else. It doesn't do anything new with the story begging the question, Why bother? Warren Beatty and Annette Bening are talented actors but Cary Grant and Deborah Kerr they are not and for a couple so happily wed offscreen they share minimal chemistry on.