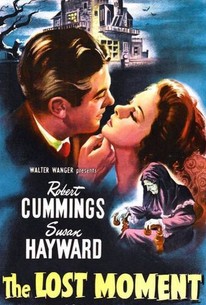 It is said that Henry James' The Aspern Papers were inspired by the romance between Lord Byron and his mistress Claire Claremont, who in her dotage jealously guarded the poems written by Byron in her honor. In the film version of James' novel, The Lost Moment, the Clairemont character, renamed Juliana, is a blind, 105-year-old recluse, played with an abundance of age makeup by Agnes Moorehead (whose amazing cosmetic makeover was the subject of several magazine articles back in 1947). The plot of the film concentrates on the efforts by a publisher named Lewis (Robert Cummings) to obtain the "lost" poems written by a legendary literary figure to the centenarian Juliana. The old lady is fiercely protected by her near-psychotic niece Tina (Susan Hayward), who nonetheless agrees to help Lewis get his hands on the precious documents. As the story unfolds, it becomes clear that the Venetian mansion where Juliana resides harbors a horrible secret, one that bodes ill for the troubled Tina and everyone with whom she comes in contact. Watching in bewildered silence is Father Rinaldo (Eduardo Cianelli), the film's "voice of conscience". Together with The Heiress, The Lost Moment is one of the few successful attempts to transfer the elusive prose of Henry James to the screen. ~ Hal Erickson, Rovi

A puzzling screen version of Henry James's fine novelette, The Aspern Papers ... would doubtless-if it had James himself for a critic-be delicately strangled in the ineluctable tendrils of his famous final manner.

Too bad Gabel didn't direct another film--this one is brilliantly Gothic.

Atmospheric mood piece isn't for all tastes, Susan Hayward herself hated it and called it the Lost Hour and a Half, and while it's no classic it has a very good central performance by Susan as the tormented Tina. Cummings however is miscast, Charles Boyer would have been much better here. Agnes Moorehead is completely unrecognizable under very impressive makeup as the ancient aunt.