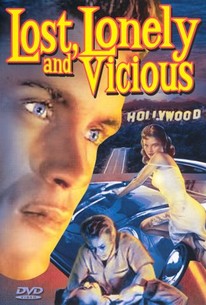 3DLost, Lonely and Vicious3D is so archetypical a 1950s film title that it was recently reused for a coffee-table book consisting of movie-poster reprints. Essentially an 3Da clef3D retelling of the life of James Dean, the film stars Ken Clayton as Johnnie, a Deanlike Hollywood actor. Obsessed with the concept of Early Death, Johnnie insists upon courting disaster with fast cars and faster women. He never commits to any one girl, convinced that he is destined to be killed in a sports-car crackup. Finally, Johnnie meets the Right Girl, a drugstore clerk whom he nicknames Preach (Barbara Wilson). Through her influence, Johnnie decides that living just might be more fun than dying.

Wasn't as bad as it sounds.

There are no featured audience reviews yet. Click the link below to see what others say about Lost, Lonely and Vicious!