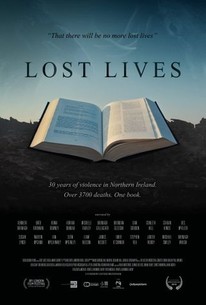 Lost Lives is a major cinematic film inspired by the book of the same name. Written over seven years by five journalists, it is a book that, uniquely, records the circumstances of every single death in a conflict -- the Northern Irish 'Troubles.' There are over 3700 entries in the book. Over 3700 lost lives. Featuring high-end cinematography, an orchestral score and readings by an ensemble cast of Irish actors, including Kenneth Branagh, Brendan Gleeson, Roma Downey, Liam Neeson, Bríd Brennan and Stephen Rea, the film is a requiem. A reminder that war is hell.

The aggregate effect is undoubtedly powerful, but Lost Lives has its limitations as a piece of filmmaking.

Few films released in 2019 have seemed as timely or as urgent as Lost Lives.

Although the aesthetics undermine the power of Lost Lives, the film still stands as an important testament to a traumatic time period whose repercussions resonate in Northern Ireland today.

If you think that going to sit in a cinema and hear a list of stories like this sounds dull, you'll be surprised by how hard this film will grab you. Distance does nothing to reduce the emotional impact.

There are no featured reviews for Lost Lives at this time.