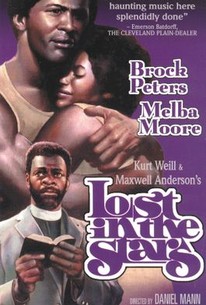 Lost in the Stars Photos

Lost in the Stars was an American Film Theatre adaptation of the musical play by Maxwell Anderson and Kurt Weill--which in turn was based on the Alain Paton novel Cry the Beloved Country. Brock Peters portrays a South African minister who goes to the Big City to locate his son Raymond St. Jacques, who is now a criminal in the eyes of the white rulers. The minister forges a curious, foredoomed friendship with a white farmer (Paul Rogers). Lost in the Stars has sometimes been accused of blunting the edge of Paton's angry study of the cruelties of Apartheid; fans of musical theatre will be more politely inclined to this loving filmization of the Broadway play. On its own, Cry the Beloved Country was previously filmed in 1951, with Canada Lee, Sidney Poitier and Charles Carson.

Critic Reviews for Lost in the Stars

The individual drama, the human cost laid at the doorstep of social policies, saves 'Lost in the Stars.'

There are no featured reviews for Lost in the Stars at this time.

Lost in the Stars Quotes