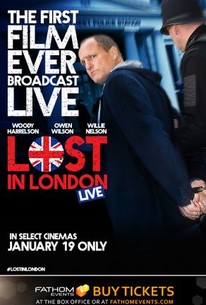 Fathom Events presents a unique one-night cinema event. Academy Award (R) nominated actor Woody Harrelson will direct and star in an unprecedented live feature film event, "Lost in London LIVE," on January 19, 2017. Harrelson, who wrote the feature film "Lost in London," will also co-star with Owen Wilson and Willie Nelson. This first-of-its-kind film event will screen live in select cinemas nationwide, giving audiences the unique opportunity to watch a film shot in real time. Loosely based on a crazy night full of real-life events, Lost in London follows Harrelson, playing himself, as run-ins with old friends and the law all seem to conspire to keep him from getting home to his family.

This humour coupled with the film's dazzling technical accomplishments give it lasting value beyond its unique 'live' aspect.

As a director, Harrelson seems to be grasping at elements of far better movies.

Laced with self-mockery, it's very funny, and far better than we had any right to expect.

Harrelson is an affectionate director, finding memorable bits for performers all across the cast list, and his writing is peppered with arresting phrases.

The on-the-hoof pace ... glosses over certain weaknesses in the story and production values that are forgivable in the context of shooting in real time.

A strong contender for funniest film of the year, yet so much more than just a comedy, Lost in London is the rare film to live up to its lofty ambitions.

It's such a technical marvel that what might be lost in Lost In London Live is that Harrelson, a first-time writer and director, has crafted a genuinely engaging, funny, and soul-baring yarn.

There was a good energy to the depiction of movie-Woody's nocturnal odyssey, and a few funny bits, but it was constructed upon a set of standard, and frankly, stale, comic premises.

There are no featured audience reviews yet. Click the link below to see what others say about Lost In London Live!