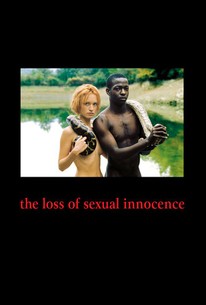 The Loss of Sexual Innocence Photos

Director Mike Figgis, creator of the Academy award-winning Leaving Las Vegas, presented this film's world premiere at the 1999 Sundance Film Festival. The story is made up of non-linear, interconnected episodes about a man at different stages of his life, all of which explicate thematically the film's title. The film also juxtaposes a retelling of the classic biblical fall-from-grace tale of Adam and Eve. We see the leading character, Nic, at 5 years old as a boy in colonial Kenya, at age 16 in swinging London in the '60s, and as a grown man working as a film ethnographer. Each sequence shows how he lost some degree of his sexual innocence, whether it be through love, puberty, or masturbation. Shot all over the world, including Tunisia, Italy, and England, the film is an exploration of sex and loss through the life of one individual.

Julian Sands
as Nic - as Adult

Critic Reviews for The Loss of Sexual Innocence

Not all of it works, but you play along, because it's rare to find a film this ambitious.

A promising movie from Mike Figgis. Where are you Mike?

The material is... indulgent. The film is ambitious, but somehow incomplete.

It seems more like a student film turned in as a project assignment.

One of the worst films ever made.

...Figgis -- one of the most interesting and meticulous directors around -- has made a genuinely boring and confusing movie.

I see [Figgis's] point, and I appreciate what he tried ... but it left me cold.

Explores the twists and turns of sexual desire in the life of an English film director born in South Africa.

A turgid, rotten bore that pretty much signals the death of "art" cinema as we know it.

Audience Reviews for The Loss of Sexual Innocence

This plot-free film plays like a stream of dreams. The downside is that it also feels like a film-school experiment driven by Calvin Klein ad aesthetics. The core story is about a filmmaker who has lost much more than the film's provocative title suggests. Scenes in which a curious child evolves to a jaded adult are also intercut with a modern version of Adam and Eve in which a black man and white woman emerge from a small lake. There's enough philosophical and cinematic doodling here for several films.

There are some people who can't even get these kind of shots on 35mm.

The Loss of Sexual Innocence Quotes