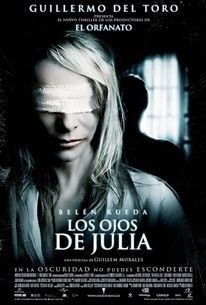 A woman is trying to unravel a mystery that she literally can no longer see in this thriller from Spanish filmmaker Guillem Morales. Julia (Bel (C)n Rueda) and her sister, Sara, have both inherited a medical condition that is slowly robbing them of their eyesight, with stress severely aggravating the condition. When Julia gets the news that Sara has died, she has a hard time believing the police report that she committed suicide, and she and her husband, Isaac (Llus Homar), begin looking into the matter. As Julia examines the particulars of Sara's death, she begins to suspect the actions of Sara's neighbor Blasco (Boris Ruiz), his daughter, Lia (Andrea Hermosa), and an aged woman named Soledad (Julia Guti (C)rrez Caba). As Julia becomes more convinced that Sara's neighbors were involved in her death, unpleasant events begin happening all around her, and as she comes closer to unraveling the knots that have tied up Sara's death, Julia inches closer to total blindness. Produced in part by Guillermo del Toro, Los Ojos de Julia (aka Julia's Eyes) was an official selection at the 2010 Toronto International Film Festival. ~ Mark Deming, Rovi

Julia's Eyes becomes a little incoherent as it plunges towards resolution, but it's unerringly stylish and whole-heartedly suspenseful along the way.

When a few of the more ludicrous twists arrive in the second half, there's enough goodwill generated by the thoughtful, creepy and effective setup to carry things through to the end.

Morales overdoes the Grand Guignol until we're numbed into submission.

This is edge-of-the-seat viewing from start to finish.

A film with no personality. [Full Review in Spanish]

Several plot twists keep us guessing, however this device is overused and the final of these is bizarre, undoing much of the work accomplished.

"Julia's Eyes" doesn't deviate enough from other Spanish thrillers of late to consider it a breakthrough, but it is a more than solid entry into the genre with some truly extraordinary thrills to be had.

At nearly two hours, the film is probably about 15 minutes too long...But the final half hour is an incredible ride, full of surprising twists and the best use of flash photography in a climax since 'Rear Window.'

An admirably innovative approach, it does indeed create a sense of helpless frustration, but as Julia's Eyes continues, the technique feels less creepy than contrived.

The stunning cinematography creates a perfect oppressive atmosphere in this thriller that grows really tense and frightening, but the film is also weakened by poor narrative choices, and if you think in retrospect you will see some plot holes. Besides, the lame last scene is unforgivable.

Started off pretty good - I thought, from all the creepy happenings, that this was going to be a ghost story. Then, because of the interesting filming after Julia's operation where the new characters introduced never show their faces, I thought she had lost her mind and was imagining the whole thing. The actuality was less exciting, but it works. Filming and acting is great. I especially liked the end scenes with the flashing camera - very effective. Good creepy movie to watch in the evening!

A woman suffering from progressive blindness and her husband come to investigate the apparent suicide of her sister, who had the same affliction. There turns out to be much more to the death than it seems on the surface, and more people may end up finding a similar fate unless the mystery can be unraveled. Julia's Eyes gets off to a good start, with an interesting premise and a captivating opening scene. But, most of what follows is not equal to the introduction. Frustrating characters and annoying plot contrivances keep Julia's Eyes from being anything more than an average mystery/thriller that had me almost disinterested during the middle portion. The ending, fortunately, is strong and helped restore some of the good feelings I had about the movie during its beginning. Don't get me wrong, it's a tense movie throughout, thanks to the natural fear of not being able to see the danger around you. And there are plenty of story twists and turns, and not all of them are predictable. But watching characters make dumb, illogical decisions just for the sake of plot progression draws me right out of the atmosphere that's so necessary for an effective thriller. When Julia's Eyes is good, it's very good. It's just unfortunate that parts of it are exercises in pure frustration.

What a ridiculous story!!! It's an awful mess which I wish I'd avoided. Julia's Eyes are better shut down.