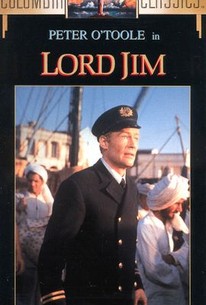 Joseph Conrad's cerebral, philosophical novel Lord Jim is streamlined and simplified by producer/director/writer Richard Brooks for the action-and-adventure crowd. Peter O'Toole plays the first officer of a tramp steamer, who, during a hurricane, cravenly abandons ship, leaving the passengers to drown. Disgraced, O'Toole seeks out ways to redeem himself--not only in the eyes of the British maritime commission, but in his own eyes. He signs on to deliver a shipment of dynamite to a tribe of natives somewhere in the uncharted Orient. He also joins the natives' fight against feudal warlord Eli Wallach, hoping perhaps to die in their service, thus purging himself from shame (and, in true Messianic fashion, becoming a martyr in the process). Despite the impressive star lineup of O'Toole, Wallach, Jack Hawkins, Curt Jurgens and Paul Lukas, most press coverage went to leggy leading lady Daliah Lavi--including the 1964 Saturday Evening Post article about the making of Lord Jim, written by Richard Brooks himself. Filmed in Cambodia and Hong Kong, Lord Jim isn't precisely the Conrad novel, but fans weaned on O'Toole's Lawrence of Arabia will be satisfied. ~ Hal Erickson, Rovi

Daliah Lavi
as The Girl

Walter Gotell
as Captain of the SS Patna

Brooks, while capturing the spirit of adventure of the novel, only superficially catches the inner emotional and spiritual conflict of its hero.

Brooks' adaptation of Conrad's novel is immeasurably better than its reputation.

Something bewildering has happened in Richard Brooks's making of it, and it misses at being either Conrad or sheer entertainment cinema.

At best, it only resembles Conrad's 1900 novel.

This stunningly exotic film of Conrad's classic features O'Toole in the title role.

Epic in ambition, awful in delivery.

A great O'Toole performance can't quite save this ponderous film.

Pretentious, complex and overlong, O'Toole's one note performance is irritating and too earnest.

Colorful but far too long drama with great cast but it has several dull patches.